A video has surfaced on social media that shows a man who went out sunbathing without removing his face mask. The short clip has been shared by Theo Shantonas. 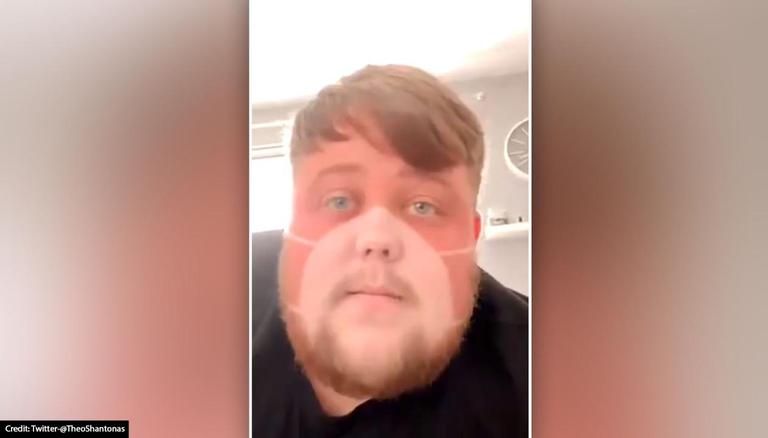 
Nowadays, people have become quite used to follow COVID-19 protocols that include wearing a face mask in public spots, but this safety measure caused a funny incident recently. A video surfaced on social media that showed a man who forgot to take off his face mask while sunbathing. The man after having sunbath had a tanned face, leaving the original complexion within the space that was covered by the mask. The short clip has been shared by a user Theo Shantonas on Twitter and people could not stop themselves from posting hilarious reactions to the whole incident.

Man forgets to remove his face mask while sunbathing

The user in the self-recorded video says, "So, I am out sunbathing in the garden yesterday. And I forgot to take my facemask off. I am really not happy, guys." He adds, "How am I meant to work like this." The video shows a man having a tanned face but the part of face covered by mask remains unchanged. The portion of the face covered by the mask shows his original complexion and the straps of the mask have also left their imprint on each side of his face. In another tweet, he stated that the video was initially shared by another person @devanwright_ on TikTok. Watch the video here:

Don’t forget to take you facemask off when sunbathing 😭😭💀 pic.twitter.com/XLcSxepgfD

Since being posted on Twitter, the video has garnered 3 million views and several reactions. Netizens, amused by the whole situation took to the comments section to share their views. Some of the users laughed at the incident while few even suggested that it was fake. One user commented, "I'm really trying so hard not to laugh right now." Another individual commented, "use wear your face mask to work and don't take it off. There, problem solved. Shame you don't work at a supermarket like me. We have to wear our masks all day at work. You'd be alright then." Another individual wrote, "It’s fake. It’s a filter. You can tell how the strap move around his face."

That's why batman works at night.

I’m really trying so hard not to laugh right now.

How can you forget taking off your mask when it’s so hot ? lol😂
but beautifully tanned! ! not bad 😂👍

Yeah, the lines on the face are questionable. My mask goes over my ears.

Looks legit, except for the moustache having a lighter colour from the rest of his beard, his tongue having a lighter shade and the top rubber bands that goes over his ears are originating from his earlobe and the lower bands are going to his neck

It’s fake. It’s a filter. You can tell how the strap move around his face