Fans of the animated series shared a scene from the series which shows an astronaut in a spaceship and he resembles the British billionaire Richard Branson. 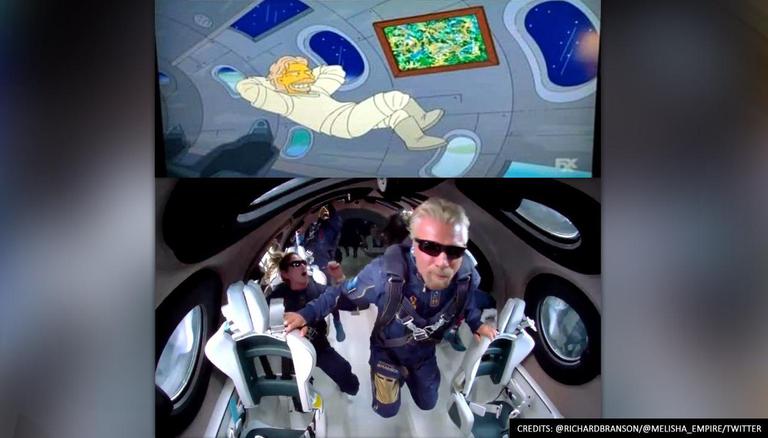 
The Simpsons have an eerie knack for predicting the future, from Donald Trump's presidency to faulty voting machines in the 2008 US election. The fans of the show recently said that the show had predicted England's loss and violence that broke out in Euro 2020 final. Now, netizens are certain that the show also knew about Richard Branson's voyage to space.

How can The Simpsons show predict every Damn thing? 😯 pic.twitter.com/9wt3uSbiFh

Netizens are putting up the two pictures together and saying that yet again The Simpsons predicted an event that was going to happen after many years. The picture was shared by a user Aditya Kondawar with the caption, "How can The Simpsons show predict every Damn thing?". Another user replied, "The point is what else it has predicted so that we can get better prepared for the future. Netizens react to the prediction made by the animated show.

Richard Branson in 2014 (on the Simpsons) and Richard on SPACE today. pic.twitter.com/VhGzv58oyV

Richard Branson in 2014 on the Simpsons and Richard in SPACE yesterday 😳😳😳 pic.twitter.com/LmsDFe019x

So true ...check this out .. pic.twitter.com/vUwgoYknw4

I guess its the other way around

Rich people watch Simpsons and then make their TODO list.

I think their writers showed every kind of (wild) imagination, which we are now turning to reality.

British billionaire Richard Branson flew into space aboard his own winged rocket ship. VSS Unity 22 flight took off on July 11 carrying a Virgin Galactic rocket plane in the vehicle's first fully crewed test flight to space. British billionaire Richard Branson was accompanied by five other passengers, in what Branson has touted as the beginning of space tourism. The Virgin Galactic vessel reached a peak altitude of around 53 miles (85 kilometres) which is beyond the boundary of space set by the United States, according to the press release. Richard Branson said that he had dreamt of this moment since he was a child but his experience of going into space was "more magical" than his imagination.

There are no words to describe the feeling. This is space travel. This is a dream turned reality https://t.co/Wyzj0nOBgX @VirginGalactic #Unity22 pic.twitter.com/moDvnFfXri

WE RECOMMEND
Euro 2020: The Simpsons 'predicted' England's loss and violence in final?
Edwin Aguilar who painted 'The Simpsons' for over 20 years passes away
The Simpsons creator talks about 'Apu' character, says something ambitious is in the works
What happened to Edna on The Simpsons? The show pays tribute to Marcia Wallace
'Simpsons' writer John Swartzwelder reveals his favourite episodes from the show