In the short clip, it is seen that a little tiger's cub named Dara was staring at the camera with complete curiosity and interest, Watch the video to know more 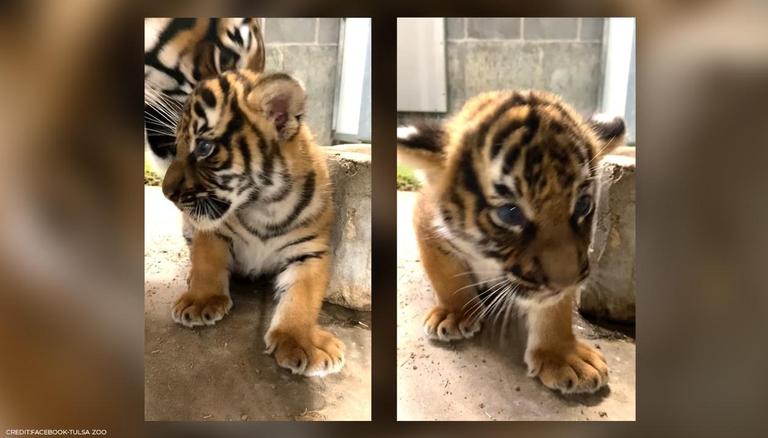 
People love watching adorable videos and photos of dogs, cats and even birds but when someone gets to witness the cuteness of a wild cat then it becomes the ‘cherry on top of a sundae’ kind of a situation. One such video of a baby tiger cub was shared on Facebook by the Tulsa Zoo. This video will definitely swipe away your day’s gloominess.

More about the Tiger's cub

In the short clip, it is seen that a little tiger cub named Dara was staring at the camera with complete curiosity and interest at the beginning of the video. Dara continued to gaze with her big enchanted eyes at the camera questioningly while her mother was maintaining a careful eye on her infant and cab be seen following after her.

The video was shared on social media with the caption “Curious Dara cuteness to get your day going.”

Let’s take a look at the Tiger's cub video:

The video was posted on August 23, has received more than 3K likes and over 17,000 views as well as a huge number of responses. Although many people cannot get enough of the adorable tiny cub, others asked for additional videos of the zoo's newest addition.

One of the Facebook users wrote, “Aww kitty kitty”, while another commented, “Dara has such a good and attentive mama” and the third has remarked, “Such a beautiful baby!! I cannot wait to meet her!” On the other hand, many others commented, “Precious”, “So adorable,” “So beautiful” and many more.

Another incident related to tiger

A few days back, the Indian billionaire businessman Anand Mahindra shared an astonishing video of two tigers sighted on a roadway. The video, which was uploaded on Twitter, has gotten a lot of attention.

In the video, one of the tigers was seen roaming in the forest while another was seen crossing the road. The video is captioned as “So our XUV isn’t the only big cat on the highway… Magnificent.” Check the video:

So our XUV isn’t the only big cat on the highway… Magnificent. pic.twitter.com/9A2ayRPXjL

Some interesting facts about tigers

Tigers are considered to be the world's biggest wild cats and the adult tiger can weigh as much as 363 kg. Tigers, unlike the majority of cats, are excellent swimmers. The roar of a tiger may be audible up to three kilometres distant. Tigers can achieve speeds of up to 65 km/h when fully charged. Each and every tiger has unique stripe patterns, they are more like human’s fingerprints.

Tigers can devour more the 27kg of meat in a single night, although they typically ingest approximately 5 kg per meal. A tiger can take several days to completely devour its prey. The big cat consumes until it is satisfied, then buries the remains with mud and twigs.