Two enormous basking sharks were spotted swimming within feet of beachgoers on an Irish beach, shocking them in the shallow waters of Keem Bay on Achill Island. 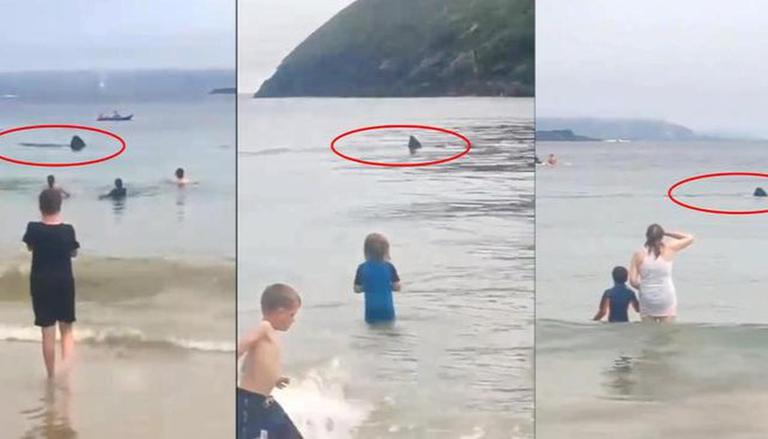 
Two enormous basking sharks swam within feet of beachgoers on an Irish beach in a shocking incident. Due to the size of their fins, what appeared to be an adult and an infant were spotted swimming in the shallow waters of Keem Bay on Achill Island, County Mayo.

Basking sharks can grow up to 26 feet long

Despite the fact that the species is harmless, spectators were concerned as a toddler was heard shouting "oh my god". Basking sharks, which can grow to be 26 feet long in adulthood, are only second in size to whale sharks, but they eat microscopic plankton. It is a migratory species that can be found in all of the world's temperate waters. It gets its name from the fact that it filters feeds on the water's surface, giving it the appearance of sunbathing. Before the trade was stopped over 30 years ago, the Bay was home to the world's largest basking shark fishery, with up to 50 sharks harvested per day.

Visit #Ireland the #people #weather and #sharks are lovely pic.twitter.com/jahSTIQPxW

Its flesh and fins are used for food, especially soup, while its hide and liver are used for leather and oil in the fishing business. However, there have been many sightings off the coasts of the UK and Ireland in recent years, including where one fed in the same area in Keem Bay every day for a month.

In April, a 16-foot basking shark was spotted swimming alongside a boat in Portloe Bay, Cornwall. In the same month, spectacular photos shot in Porthcurno, Cornwall, showed a paddleboarder surrounded by 20-foot basking sharks. The sharks circle the paddleboarder in the footage, with photographer Michael Amos, 20, stating it was a "luxury" for him to catch a view of the great sea monsters.

READ | Great White shark pounces out of water and tries to clench a boat with its teeth; Watch

Another basking shark was spotted feeding every day for a month in Keem Bay, just metres from the shoreline, in 2019.

The species is classified as vulnerable

The species does not hibernate and is active all year, boosting the chances of being observed, especially during the warmer months when they dive to deeper depths of up to 3,000 feet. The IUCN (International Union for Conservation of Nature) has classified it as vulnerable.