A US bride made her wedding day more special after she caught a huge 50-pound black drum fish while still in her wedding dress. See how netizens are reacting. 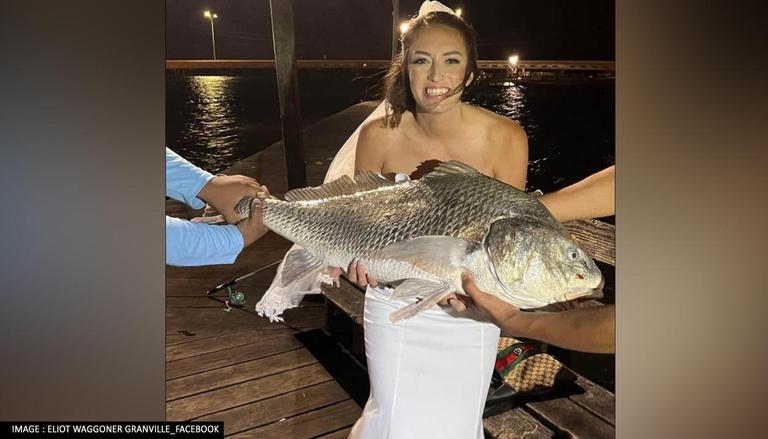 
Weddings mark an important event in every person's life and every single thing that happens on that day remains etched in a person's memory forever. In an incident from the USA, a giant fish weighing 50 pounds (22.6 kgs) has made its way into the wedding pictures of a bride.

The US-based bride's wedding became more memorable after she caught a 50-pound black drum fish, while still in her wedding dress. According to Newsweek, the newlywed couple decided to go fishing on the night of their wedding day on Sunday. The post of the bride carrying a fish in her hands was posted online and has since gone viral.

The picture shows the bride, Eliot Waggoner Granville holding the fish. After getting married on Sunday, she and her husband decided to go fishing and to their surprise caught a drum fish. Still wearing her wedding dress and veil, Eliot cast a line off Red Dot Pier in Corpus Christi. After spending 45-minutes, the bride felt something bite her fishing line. "Caught this bad boy on my wedding night," the bride captioned the Facebook post.

As per Newsweek,  the bride further went on to say that once she realised that the fish was much larger than she thought, she used a net to lift the fish's head out of the water and haul it into the pier. Eliot estimated that the black drum fish weighed around 40 to 50 pounds (18-23 kgs). Moreover, the bride told that her arms were sore after lifting the fish for the photo. It can be seen in a photograph posted on her Facebook page that shows two men holding the fish on either side to help support the weight. Eliot said taht she goes fishing to feel closer to her father, who died last year.

The photograph on Facebook has garnered several likes and comments. A user quipped, "Where is the other fish you caught lol (sic)". A second user wrote, "Nice catch!!".