US Man Enters Guinness World Records For Eating Over 32,000 McDonald's Burgers In 50 Yrs

A man from the United States has marked the 50th anniversary of eating the McDonald's burger almost every day and earned a spot in the Guinness World Record. 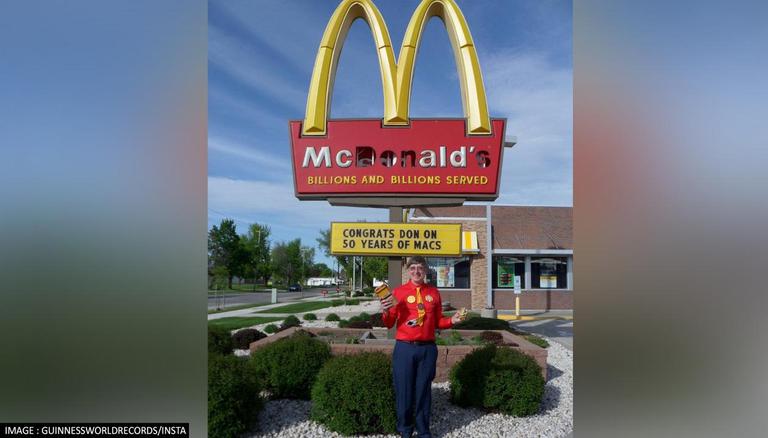 Donald Gorske went to McDonald’s restaurant in Fond du Lac, Wisconsin on May 17 to celebrate his 50th anniversary of eating the McDonald's burger. He marked the occasion in the very same branch where he first had the Big Mac burger in 1972. Gorske has only missed only eight days of not eating a McDonald's burger in the last 50 years and he eats two Big Macs a day.

His record for eating the most Big Mac burgers in a lifetime was first officially recognised in 1999 at 15,490. Since then, he has been keeping a record of the burgers he eats using a burger carton and receipt, according to the statement released by the Guinness World Records. He also has glass cases which contain burger cartons from different periods showcasing different designs throughout the years.

Donald Gorske started eating Big Macs in McDonald's in 1972. He said, "I drove straight to McDonald’s, got my first three Big Macs, then got in the car and ate them. In that moment I said I’m going to probably eat these for the rest of my life. I threw the boxes onto the back seat, and started counting them from day one," according to Guinness World Records.

Donald Gorske said that he has tried different burgers over the years. However, he never had the desire to eat them again. He stated that he will continue to have Big Macs every day for the rest of his life. On his 50th anniversary of eating the burger, the McDonald's restaurant had placed a sign outside the branch that read, "Congrats Don on 50 years of Macs."

Today's the day for Don Gorske! 🚨

He has eaten a Big Mac from @McDonalds EVERY DAY for the last 50 YEARS! 🍔