After revealing that there is no difference in size between small and medium popcorns, a former movie theatre staff has sparked debate online. 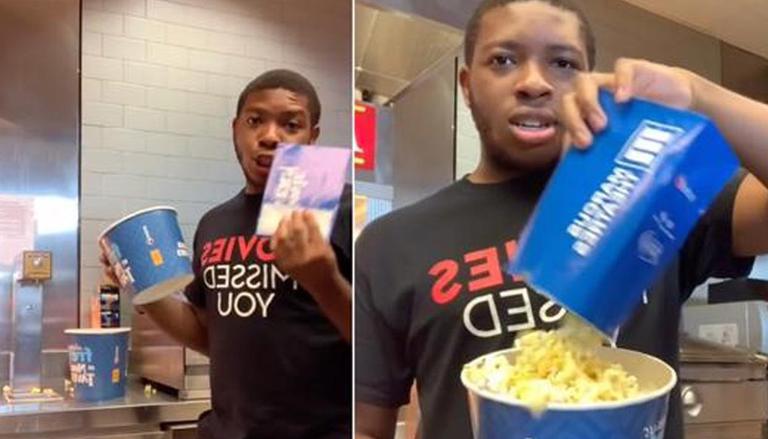 
After revealing that there is no difference in size between small and medium popcorns, a former movie theatre staff and Tiktoker has sparked debate online. June Long, a TikTok user who stated he had given his two-week notice, presented a conversation with a customer in which he explained that small and medium popcorns have the same amount of popcorn in them.

Long presented a skit to disclose the secret

"We got large, regular, and junior," he added in the video, demonstrating large and ordinary buckets as well as a little bag. Long, impersonating a customer, asked, "Could I get the medium popcorn, no, that's too much, could I just get small?" He noted the price of $7.35 after filling the little bag. When the customer realised the small was too little and asked for a regular, he just dumped the popcorns of the bag into the bucket and increased the price to $8.44.

He captioned the video, "If you're at the movies just get a small or large, no in-between."

Not everyone believes his claim

Despite the fact that it has received over one million likes, not all viewers believe his claim, with some pointing out a few logical errors. The popcorn doesn't fill the medium bucket as much as it filled the tiny bag, demonstrating that there is a difference in capacity between the two. Others have also remarked that between the first and second shots, more popcorn appears to have been added to the small popcorn before it was put into the bucket, giving the impression that there is less popcorn than there actually is when the medium is filled.

This isn't the first time portion differences have been questioned on TikTok, and previous allegations have also been investigated online. According to one viral video, three different-sized McDonald's cups had the same quantity of liquids. Snopes (a fact-checking website) looked into the matter and came to the conclusion that McDonald's cup sizes for small, medium and large do not hold the same quantity of liquid. This is a clever joke with a cunning trick. Unbeknownst to the viewer, the medium and big cups were pre-filled with liquid to make it appear as if they did.