A viral video shows a dog holding a tiny hockey stick in its mouth with a ball kept in front of it, Glass is also kept sideways at a distance. 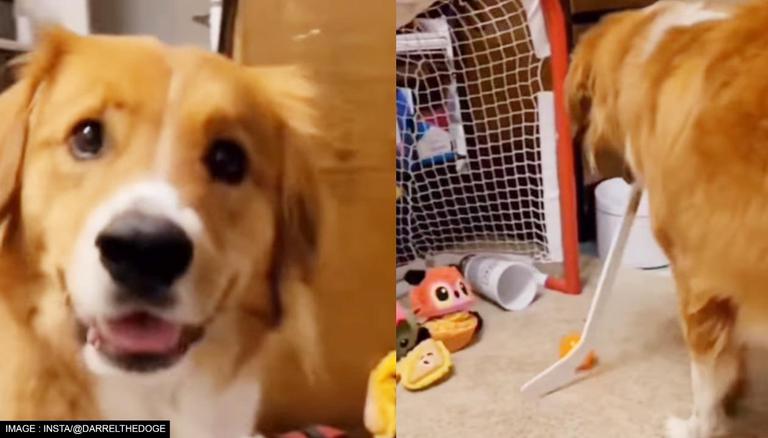 
The internet is often flooded with videos of cats and dogs in which people get to witness their goofiness. No denying that such videos always turn out to be adored by viewers. Similarly, a viral video shows a dog playing with a hockey stick and a ball. The video will surely make you watch it twice.

The video shows a dog holding a tiny hockey stick in its mouth with a ball kept in front of it. Glass was also seen kept sideways at a distance. The dog was seen confidently approaching the ball and hitting it with the stick. As the video progressed, it showed that a dog scored a goal. Instantly, he turned around to face its owner and one can see the look of pure joy reflected on his face. "This goes out to anyone that needs an extra boost of positivity. Darrel is working on shooting on the corners, and so proud every time he succeeds", read the caption on Instagram.

Previously, a video of a pet dog surfing in the ocean all by itself went viral on the internet. As the video progressed, it showed a dog took a clue from its instructor to start surfing, and then it wonderfully managed to stay on the surfing board for quite some time. No denying that the antics of dogs are always heartwarming.

The dog video has been doing rounds on the internet and has accumulated 27.5K views accompanied by several likes and comments. The video has also prompted many to put their views, "Great job !!!!! Such a smart boy !!!!!", a user wrote. The second user wrote, "You always score Darrel ". The third user wrote, "This is going to have to be our next trick impressive".