WATCH: Cat Hanging On For Dear Life At Stadium Sends Fans Into Panic; Then It Falls... 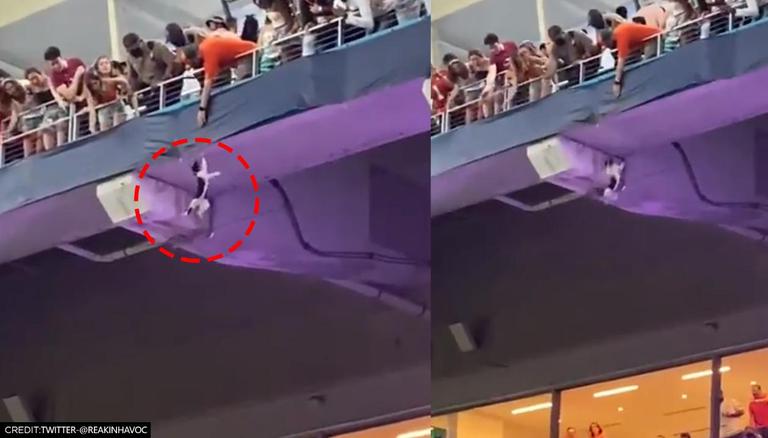 
Fans attending the Miami Hurricanes home opener against Appalachian State on Saturday witnessed a shocking incident when a cat somehow got into Hard Rock Stadium. During the first half of the Miami Hurricanes vs Appalachian State game, fans suddenly witnessed a cat hanging from a wire that was dangling off the upper deck. Seeing the cat struggling to hold the wire, fans ran to help the cat. While some tried to pull the cat up, others were in a position to catch the cat.

Eventually, the cat fell to the lower level of the stadium, where fans using an American flag as a makeshift net were able to safely catch it before it was carried off to safety.

Soon, Hard Rock Stadium took to its Twitter handle and updated the fans about the well-being of the cat. Lauding fans' presence of minds to save the cat, the Hard Rock Stadium and announced a donation to Humane Society Miami following the incident. As per the official bio, Humane Society Miami is an adoption facility, and work to place every animal  'into a loving home'.

We are happy that due to the heads up nature of fans in sections 107, 110 & 208 the cat landed safely after a harrowing fall. We wish the cat the best in his remaining eight lives.

We have made a donation to @humanemiami and encourage fans to do so. https://t.co/NAVvDYiO41

“They were trying to grab it from above and they couldn’t reach it but they were scaring it downward,” said Craig Cromer as reported by AP, a facility manager at the University of Miami and season-ticket holder who with his wife Kimberly brings the flag to each home game.

Miami coach Manny Diaz said he learned of the cat incident postgame. The Hurricanes held on Saturday, topping Appalachian State 25-23. “I don’t know anything about that or what was going on,” Diaz said. “But I’ll tell you, if the cat will help us in our red-zone offense I’m going to see if we can give it a scholarship.”

Miami fans save cat from falling of upper deck. pic.twitter.com/QL8WRIepIY

Happy Sunday morning! These fans in Miami worked together to save this stray cat from falling. One group even helped break the cat’s fall with their American Flag! 🥰pic.twitter.com/tim7C5Ny8H

This is too wholesome!! Cat is dangling by his paws🐱🐾 at a miami hurricanes football🏈 game, falls like scar, then is caught below by fan with american🇺🇸 flag on 9/11/2021. Held up high like simba😆😄🙌🏽👏🏽👏🏽👏🏽👏🏽👏🏽THAT'S MURICA!!✊🏽🇺🇸🇺🇸🇺🇸 pic.twitter.com/XjKk1IspGv

READ | Who is Bala Devi? Know all about 1st Indian woman to sign up for a European football club
READ | ‘Looking forward to playing again’: Football legend Pele ‘recovering well’ after surgery