Woman Tries To Sing Like Elsa From 'Frozen II' But The Response Scares Her; Watch

An extremely enthralling video of a woman, who tried to sing like Elsa from Frozen II has gone viral on social media. But her performance doesn’t go as planned.

An extremely enthralling video of a woman, who tried to sing like Elsa from Frozen II, has gone viral on social media. But her performance doesn’t go as expected. The video has gained popularity and netizens are going gaga over it.

The video shows a woman standing on her balcony, singing the Elsa song while standing in a similar position as Frozen II. In the movie, an unknown voice echoed the notes back to the ice-queen of Arendelle, which became a focal point of the plot. However, in the video, it is not clear what the woman was expecting, but what she heard back was clearly not the same reaction that Elsa had in the film. While Elsa heard a soft angelic voice in return, this woman’s melodious call was reciprocated by a man screaming. The yell was so loud and unexpected that the lady felt “scared”. However, it seems he followed the note placement correctly, as per reports.

She got scared from funny

READ: James Lipton Gets An Emotional Tribute From Hollywood Celebrities And Public Figures

The video which is five-second-long was shared on Reddit on March 24. It was captioned “she got scared”, and since it has been uploaded, the video has garnered over 47,200 upvotes and 700 comments, with a barrel of comments. The video has gained a lot of popularity and is definitely amusing.

Reddit users had amusing responses to the post. One person tried to guess what the lady must be thinking, commenting “do I really sound like a wailing man”?  Another joined the trend responding with, “I think I sound fine but when I hear recordings I am 100% Kermit the frog”.

There was another user who said, “awkward”. To this people responded, “misspelt awesome”. Another user said, “this is the best thing I’ve seen in quite a while. I laughed so hard”.  While one wrote, “I died there. ROFL”. This wailing may not have been the call ‘into the unknown’ this woman was expecting but it was unquestionably entertaining for the people to watch. 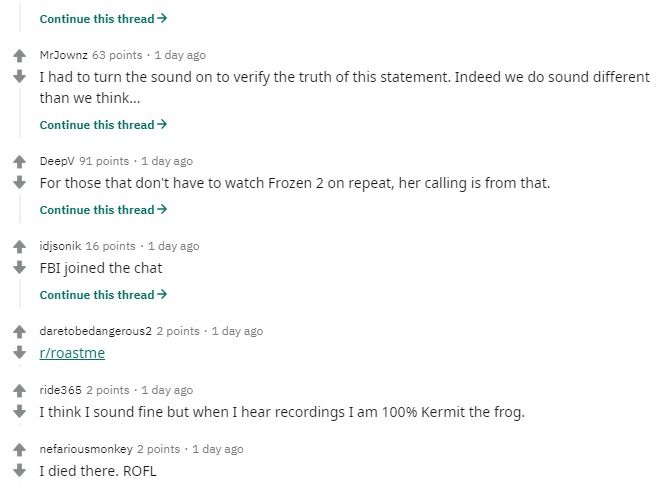 READ: From Kaia Gerber To Mamie Gummer, Hollywood Kids Who Are A Spitting Image Of Their Parents