A video has surfaced on the social media shows a man helping an eagle drink water from a bottle. The clip has been shared by Buitengebieden on Twitter. 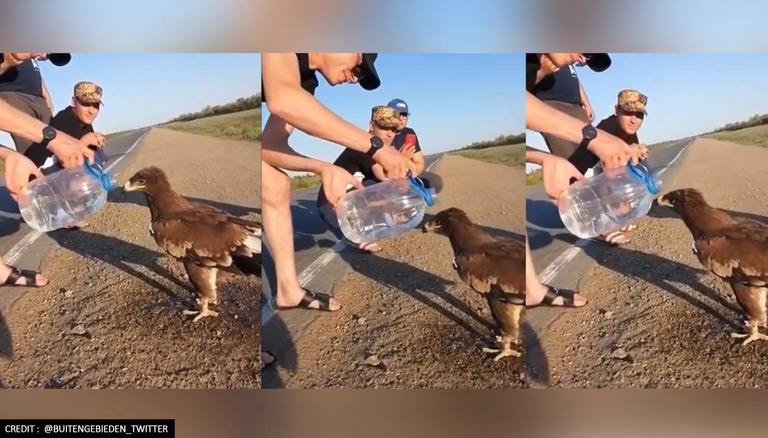 
A heartwarming video that has surfaced on the internet shows a man helping an eagle drink water from a bottle. The clip has been shared by a user who goes by the name Buitengebieden on Twitter. The video features three men and one of them can be seen helping the eagle drink water from the bottle. The clip has won the hearts of netizens who took to the comments to appreciate the kind gesture.

The short clip has been posted with the caption: "Thirsty eagle". It shows three men on what looks like a highway where the man is spotted helping the bird. He poured water from a bottle on the eagle's beak. While he patiently helped the eagle drink water, the other two men were standing there and watched him. The eagle seems confused at first but eventually manages to drink some water. The man with his thoughtfulness helped an eagle in quenching his thirst. Watch the video here:

Since being shared on Twitter, the video has garnered 54K views and 4476 likes. The viral video has caught the attention of netizens who took to the comments section to thank the man for helping the eagle. One user commented, "Beautiful! Fascinating! I wish I was there!". Another wrote, "God Bless you bro." Another individual commented,  "Thanks to these people for caring."

Wonderful and so sweet 💙🌷

Thanks to these people for caring ❤️.

In another worth mentioning incident, a baby elephant, stuck in a reservoir, was rescued by forest officials as the video of the incident has gone viral on social media. The video was shared by Parveen Kaswan of the Indian Forest Services on Twitter and netizens praised the officials after watching it. After the rescue, the baby elephant reunited with its family. The video shows the elephant trying to climb out of a reservoir that supplied water to the village but all its attempts were unsuccessful. The rescue team used sticks and ropes to pull the elephant out. A team of veterinarians also reached the spot to examine the elephant calf.

Kiddo fell into reservoir from where water was being supplied to village. Territorial team, wildlife squad II & vet team reached on time. Was rescued & happily united with family. Mother was watching from safe. Our team. pic.twitter.com/NqSnhH94Rs