Yashraj Mukhate's songs are loved by people and there are numerous memes and posts all over the internet asking him to make a spoof on the viral Shweta video.

While people on social media are still not done with the Pawri Hori Hai meme created by Yashraj Mukhate, there is a new viral Shweta video on the internet which has got people laughing over the blunder made by a girl named Shweta during a Zoom call with her classmates. The 2.5 minute-long video posted on Youtube shows how Shweta didn't realize her mic was on during the meeting and went on to narrate somebody else's secrets, which everybody else in the meeting also heard. Shweta memes have taken over the internet and everybody is hoping for a new remix by Yashraj Mukhate on it. Here are a few memes by Twitterati that show their excitement for a Yashraj Mukhate and Shweta collaboration.

The internet is having a field day with Shweta's viral video and everybody is coming up with hilarious ideas on how to make memes based on it. A girl named Shweta who mistakenly revealed one of her friend's secrets in front of the whole class has got netizens waiting for Instagram sensation Yashraj Mukhate to add beats to it and make it a spoof, just like his previous ones including Pawri Hori Hai, Shehnaaz Gill's Twadda Kutta Tommy, Rasode Mein Kaun Tha among others. Here are a few tweets which show how eagerly the netizens are waiting for it.

Is Yashraj Mukjate getting enough sleep tonight?
Or just swamped with lots of work because of #shwetha #Shweta #yashrajmukhate #meme #shwetayourmicison #Pawri #Pandit

#yashrajmukhate right now...after #Pawri
Honestly even I am waiting for his new song on #Shweta pic.twitter.com/U54YG67uTV

Now only thing to beat #shweta would be #yashrajmukhate doing what he does best with the video...

Although almost the entire internet is now anticipating a spoof from Mukhate, given the array of memes on Twitter and Instagram, Yashraj took to his social media handle and stated that there wouldn't be a song coming out on the viral Shweta memes. In an Instagram story that he uploaded yesterday, the Rasode Mein Kaun Tha hitmaker said that there just wouldn't be a song about Shweta and also that a lot of people messaged him personally asking him to do a song about her. Not only that, but he also shared another story where he took a dig at the whole situation and made a small tutorial for Shweta, teaching her how to switch off the mic during a Zoom Call. He demonstrated the entire process step by step in a hilarious way. 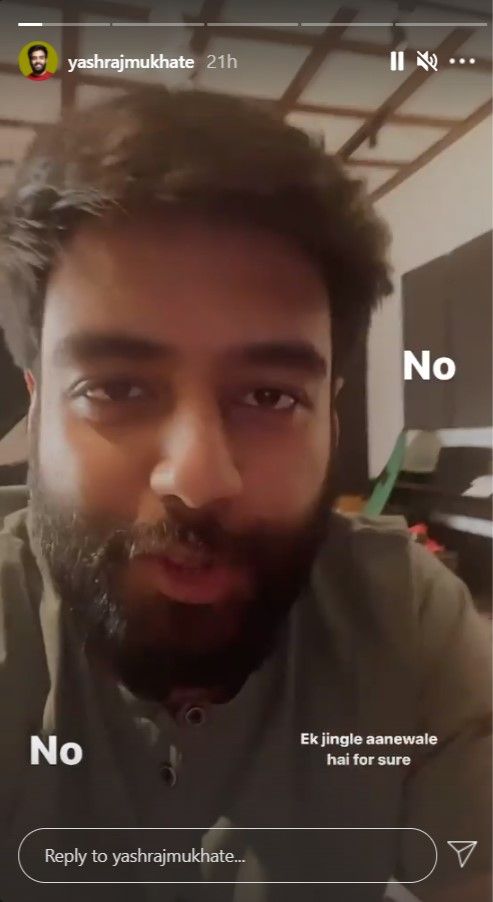