A WhatsApp forward has gone viral claiming that the government is offering one year of free internet access in celebration of the Tokyo Olympics' performance. 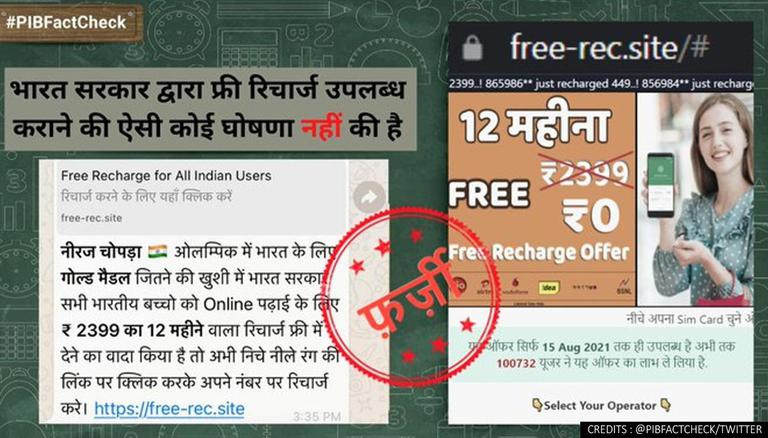 
Amid the COVID-19 pandemic, there is an epidemic of fake news. Now, fraudsters are using India's prime performance's in the recently concluded Tokyo Olympics to spread misinformation. Recently, a WhatsApp forward has gone viral claiming that the government is offering one year of free internet access in the joy of getting a gold medal in the Tokyo 2020 Games.

The WhatsApp forward claims: "In the joy of Neeraj Chopra securing a gold medal for India in the Tokyo Olympics, the Government of India has decided to provide free internet access worth Rs 2,399 for one year for free to children for studying purposes To recharge, click on the link below."

However, busting the fake news, the Press Information Bureau called the claim fake. It informed that no such scheme has been announced by the government.

"Claim: #Olympics2021 In the joy of getting a gold medal, the Government of India is giving 12 months of free recharge opportunity to all. #PIBFactCheck: This claim is fake. Government of India has not made any such announcement regarding free recharge," PIB Fact Check tweeted. PIB has also asked people to not click on the unverified link or share personal information.

This is not the first time that scamsters have used WhatsApp to share fake claims. Last month, a similar claim went viral claiming that the Govt of India is offering three months of internet access. The message claimed that the offer is valid for subscribers of Reliance Jio, Airtel and Vi (Vodafone Idea). It also suggested the deadline of June 29, 2021, to avail the offer. However, PIB was quick to term it fake news.

"The message claims that the Indian government is providing free internet facility to 100 million users for 3 months. PIB Fact check: This claim and link are fake. No such announcement has been made by the Government of India. Beware of such fake websites," the Centre had tweeted.

PIB Fact Check is the government's platform to counter misinformation on government policies and schemes. If you suspect any government-related news to be fake, you can send it to PIB at socialmedia@pib.gov.in or +918799711259.