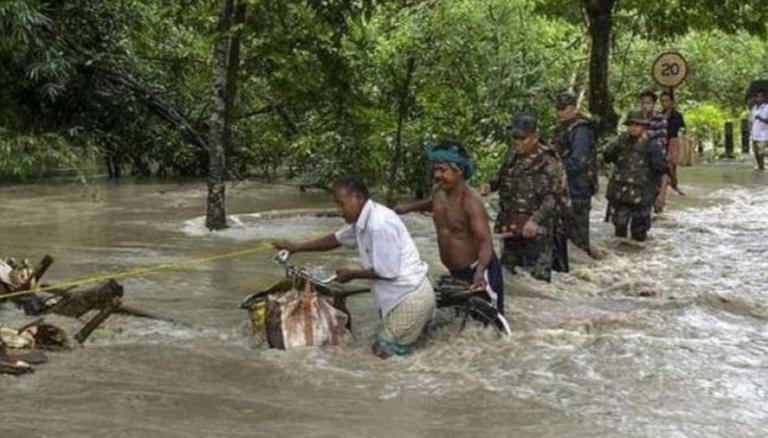 
Following heavy rains in the entire state, Assam continues to reel under a difficult flood situation with water flowing above normal levels in several districts. As per the latest update, seven more people have died in the Assam floods taking the cumulative death toll to 108, reported PTI on Friday.

While two death each were reported from the districts of Cachar and Barpeta, one death each was reported from districts like Bajali, Dhubri, and Tamulpur, informed the State Disaster Management Authority (SDMA). Among them included two children who also lost their lives in floods on Thursday.

Speaking about the flood situation in the state, so far 30 out of 35 districts have been categorised as flood-affected regions with thousands of people reeling under the devastating aftermath of the Assam rains. As of now, a total of 45,34,048 residents have been said to be adversely affected by the torrential rains and rain-related incidents in the state.

In addition to people, hectares of land and crops have also been damaged in the floods and rains with Barpeta being the worst-affected district in terms of agricultural damage. As per the recent updates, crops across 1,00,869.76 hectares of land have been destroyed, while 592 hectares across eight districts have been also damaged.

Relief camps have been set up across the state giving shelters to around 2,84,875 persons. With a total of 759 relief camps, set up, Barpeta has the highest number of locals - 1,10,535 living in the camps.

In the meantime, water levels in rivers also continue to flow above the danger line as the Brahmaputra river and Barak rivers along with their tributaries are overflowing, leaving thousands of people stranded and villages flooded.

Assam CM thanks PM Modi for his assistance

Witnessing the Assam floods situation, chief minister Himanta Biswa Sarma has thanked Prime Minister Narendra Modi for his constant assistance, advice, and generosity in dealing with the flood situation in the state.

"Hon'ble Prime Minister, we are eternally grateful to you for your assistance, advice, and generosity at every moment in dealing with the current flood situation in the State. Your cooperation is our guide. On the basis of this cooperation, we are working day and night to serve the affected people", he tweeted on Friday.

PM Modi had also informed that the Centre is working closely with the Assam government to extend every possible help to the flood-affected state. He further also said that teams of the Indian Army and NDRF are present in regions and are conducting evacuation operations and assisting the affected people.

"The Air Force has also conducted over 250 sorties as a part of the evacuation process", he added.