4 infants lost their lives on Monday after a fire broke out in the special newborn care unit of the Kamala Nehru Hospital in Madhya Pradesh's capital, Bhopal. 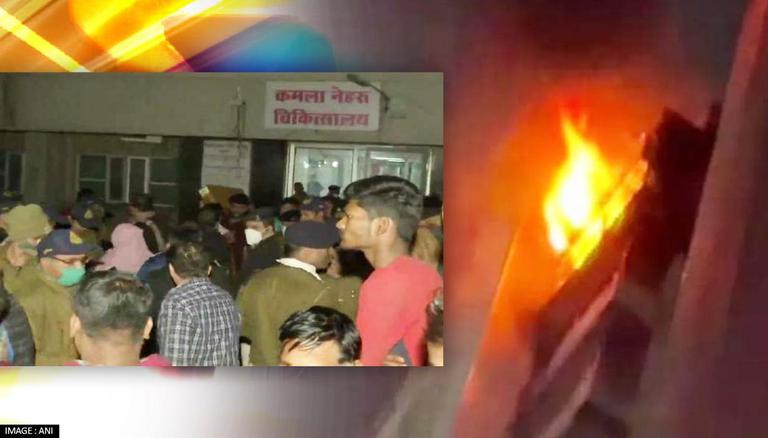 
The Chief Minister Shivraj Singh Chouhan-led Madhya Pradesh government announced on Tuesday, November 9, an ex gratia sum of Rs 4 lakh for parents of children who died in a horrific fire tragedy in Bhopal's Kamala Nehru Hospital. Four infants lost their lives on Monday night after a fire broke out in the special newborn care unit of the Kamala Nehru Hospital in the state's capital.

Expressing sadness over the incident, Chief Minister Chouhan wrote on Twitter, "The incident of fire in the child ward of the hospital is very sad. The rescue operation was swift, the fire was brought under control, but unfortunately, the three children who were already seriously ill could not be saved."

Later, he shared, "Sad news has been received that another child could not be saved. It is heartbreaking. My deepest sympathies to the families of the victims. The entire state is with them in this hour of grief."

Additionally, the Madhya Pradesh CM vouched for his absolute support to a 'high-level inquiry' to identify the negligence or perpetrators accountable for the mishap. He said that the probe will be carried out by the  Additional Chief Secretary of the Public Health and state Medical Education, Mohammad Suleman.

Taking to Twitter, CM Chouhan shared, "A high-level inquiry has been ordered into the incident. The investigation will be done by ACS, Public Health and Medical Education, Mohammad Suleman."

The state's Minister of Medical Education, Vishvas Sarang stated, "Immediately after receiving information about the fire in the children's ward of Kamala Nehru Hospital, rescue and relief operations were started. Four children could not be saved in the accident, whose families will be given compensations of Rs 4 lakh each. Other children are being treated. Presently the situation is completely under control."

"There were 40 children in the ward out of which 36 are safe. Ex gratia of Rs 4 lakh will be given to parents of each deceased," Vishvas Sarang told ANI.

'Fire cause by short-circuit'

The fire broke out in the hospital at around 9 pm and eight to 10 fire tenders were rushed to the spot to douse the flames, said Fatehgarh Fire Station in-charge Juber Khan. Smoke filled a room of the children’s hospital, he added. Reports suggest that short-circuit could be a probable reason behind the fire, that swept through the newborn care ward of the hospital.

"Four children died in the fire that broke out in the special newborn care unit (SNCU) ward probably due to a short circuit. We reached the spot along with others soon after getting information about the incident. It was dark inside the ward. We shifted the children to the adjacent ward," Sarang informed.

Kamala Nehru Children’s Hospital is part of Hamidia Hospital, one of the biggest government medical facilities in the state.