Fire Rages At Empty Land Of Chennai Metrowater In Koyembedu; More Than 12 Fire Tenders On Site To Douse Fire

A huge fire has been noticed in an empty land belonging to Chennai Metrowater, in Koyambedu district in Chennai on Monday, as per reports.

A huge fire has been noticed in an empty land belonging to Chennai Metrowater, in Koyambedu district in Chennai on Monday, as per reports.

Visuals show huge clouds of smoke rising from behind dry grasslands. Firefighters along with additional backup of water tankers are seen on site battling to douse the fire. While the source of the fire is not visible, the copious amounts of white-gray smoke rising from one particular area zero down the location of the fire.

WATCH: Fire Breaks Out In A Plastic Factory In Daman's Dabhel

Reports claim that the fire was reported at around 2:30 PM by some locals who had seen the smoke rising. The cause of the fire is still unknown as of now, according to reports.

Pictures released by ANI also show a part of the doused area with dry grass turned into ash and mixing with the water used to douse it. A small stream of black water is seen flowing across the land, dividing the fire-raging area and the dry land. 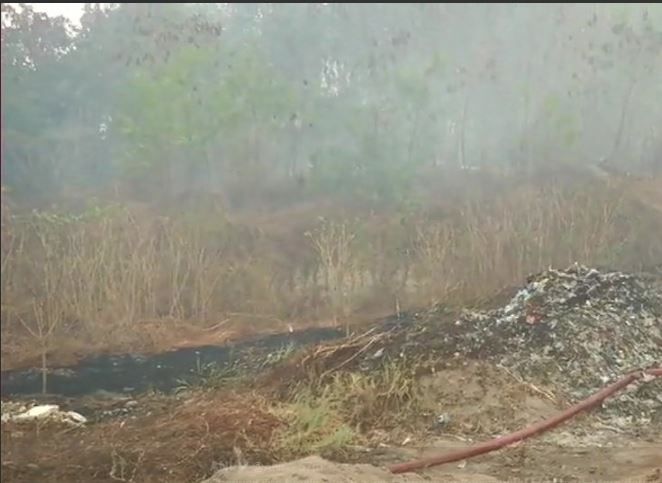 As per ground reports, more than 12 fire tenders have been deployed to the spot by Tamil Nadu Fire and Rescue department which has been continuously working to douse the fire and to prevent its spread.

While no injuries have been reported, an investigation is allegedly underway in trying to determine the cause of this fire.