Landslide In Uttarakhand: No Casualties Reported As Bus With 14 Passengers Survives

A bus carrying 14 passengers narrowly escaped a Nainital landslide on Friday. No casualties have been reported in the landslide in Uttarakhand. 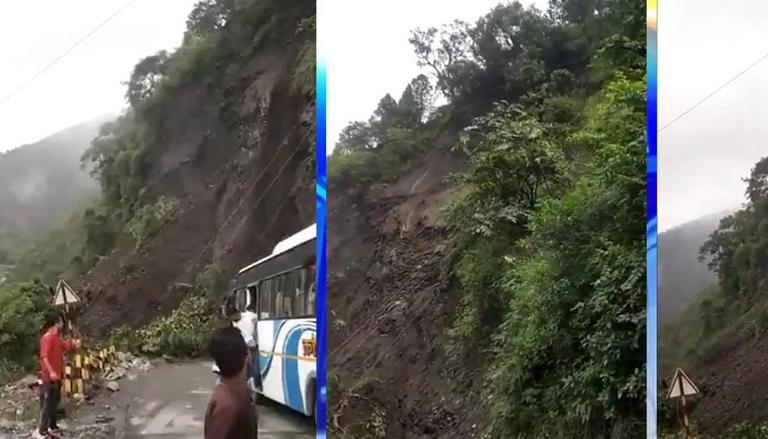 
A bus carrying 14 passengers narrowly escaped a landslide in Nainital on Friday. This landslide was in Nainital and no casualties have been reported. The passengers were heard heaving a sigh of relief. The bus is seen coming to a complete stop barely in time to avoid the falling debris. The landslide was caused by the region's heavy rainfall.

Nainital Landslide in Uttarakhand; no casualties reported so far

Some people are seen getting off the bus with their bags and sprinting away from the landslide location in the minute-long footage. To maintain a safe distance, the bus driver reverses the vehicle. The footage also shows a section of the mountain collapsing, along with uprooted trees. The debris continued to fall, blocking the road, as shown in the video.

#WATCH | Uttarakhand: A bus carrying 14 passengers narrowly escaped a landslide in Nainital on Friday. No casualties have been reported. pic.twitter.com/eyj1pBQmNw

The India Meteorological Department (IMD) has issued a two-day rain warning for Uttarakhand, forcing the state disaster response force (SDRF) to activate all of its teams. On Friday, the IMD issued a warning for 'heavy to very heavy rain', with strong spells anticipated in isolated areas of Uttarakhand. Thunderstorms with lightning were also expected in isolated areas around the state, according to the forecast.

Series of landslides seen in Uttarakhand

There have been a number of landslides seen in Uttarakhand and Himachal Pradesh in the past 2 months. Some of these have resulted in fatalities. Most were triggered by heavy rainfall in the area, while a wave of revenge tourism was also seen in these states.

Heavy stones crashed on their tempo traveller, killing nine tourists and injuring three others, including a local citizen, during numerous landslides in Himachal Pradesh's Kinnaur last month. A landslide at the Rishikesh-Badrinath National Highway in Uttarakhand's Chamoli district was prompted by heavy rainfall around a week ago.

Due to the debris, the national highway was closed, causing a traffic jam in the vicinity as large rocks slid downhill near Totaghati in Tehri district approximately a week ago. This blocked vehicular passage on the Badrinath route. A hotel constructed on top of NTPC's tunnel fell down around a month ago owing to a landslide in the area.