The Jammu and Kashmir Police found an approximately 1200-year-old sculpture of Goddess Durga from the Khan Sahib area of Budgam district on Tuesday. 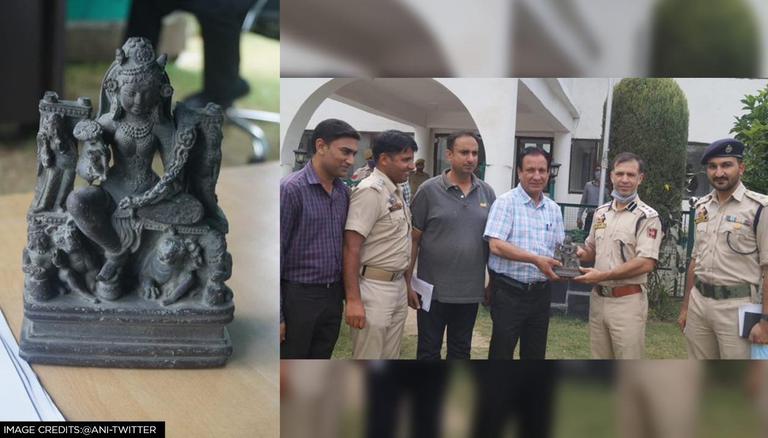 
The Jammu and Kashmir Police found an approximately 1,200-year-old sculpture of Goddess Durga from the Khan Sahib area of Budgam district on Tuesday, 31 September.

A Goddess Durga sculpture, estimated to be around 1,200 years old, was discovered by some labourers mining sand from the Jhelum River at Pandrethan in Srinagar, according to the Jammu and Kashmir Police. On 13 August, labourers discovered the black stone idol, which was eventually turned over to the J&K government's Archaeology and Museums department.

According to the police, Tahir Saleem Khan, (SSP) Budgam, handed over the sculpture to Mushtaq Ahmad Beigh, Deputy Director, Department of Archives, Archaeology, and Museums, and his team.

"Pertinent to mention that the said sculpture was found from river Jhelum at Pandrethan, Srinagar by labourers who were extracting sand from the river on 13th August 2021," added J&K Police.

A historical research group had reportedly claimed to have discovered the possible ruins of an old temple from the 13-14th century Common Era in Odisha's Puri district. The ruins were discovered by a four-person team from the Rediscover Lost Heritage project, which is now documenting the archaeological monuments in the Ratnachira Valley. They were discovered near the mouth of the Bhargavi river in the Balanga area, 31 kilometres from Puri.

A few weeks back, a metal detectorist discovered an old sword adornment from 1400 years ago. An archaeologist discovered the Anglo-Saxon artefact in Norfolk, eastern England, in April using a metal detector. The sword pyramid, also known as the sword harness, was created between A.D. 560 and 630. Sutton Hoo-era nobleman is supposed to have lost the 12mm by 11.9mm (0.41in by 0.41in) mount while careening through the countryside when Norfolk was a part of East Anglia's Anglo-Saxon Kingdom.