After Bangalore, people in Hyderabad woke up to a rare phenomenon called "Sun Halo" on Wednesday. Here's how netizens reacted to these special rings. 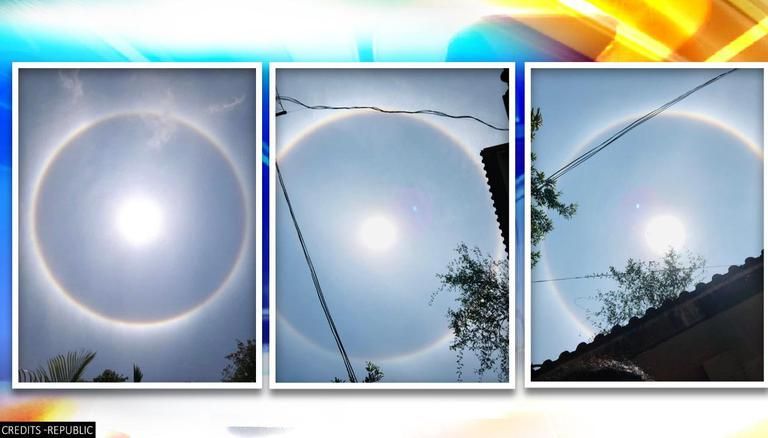 
After Bangalore, people in Hyderabad woke up to a rare phenomenon called "Sun Halo" on Wednesday, June 2. Last week, the delightful residents of Bangaluru spotted this phenomenon and shared several pictures and videos of the rainbow rings. The Hyderabad sky was filled up by a rainbow ring encircling the sun, which electrified netizens. Here are some of the pictures of the phenomenon on Wednesday:

What is Sun Halo?

The Sun Halo, also known as the 22-degree circular halo of the Sun or the Moon, is a celestial phenomenon that consists of a beautiful rainbow ring with the sun in its centre. Winter Halo or the Moon Ring is the name given to the ring that appears around the Moon. In the case of the Sun, it occurs when the Sun's rays are deflected or refracted by hexagonal ice crystals floating in the cirrus clouds. Even though it is widespread in cold countries, it is uncommon in India and remains unpredictable.

READ | Bengaluru residents delighted to spot rainbow ring around the sun, here's what it means

Also, when there are moisture-laden cirrus clouds in the sky around or surrounding the celestial bodies, the ring forms around them. As a result, it is a regional occurrence. There's also an old weather proverb that states, 'Ring around the moon signals rain is on the way.' This is due to the fact that towering cirrus clouds frequently appear before a storm. The halos are the result of high, thin cirrus clouds floating at least 20,000 feet over the heads.

It is noted that the halos have piqued people's interest and sparked superstitions since Babylonian times. During the War of the Roses, King Edward IV of England used the event to help him win a battle. The halos are now recognised to be linked to crystals that scatter light, thanks to study. Halos can sometimes signal the arrival of a storm. The rainbow halo was used in biblical times as a sign from God as proof of his promise with Noah to never flood the Earth again. A solar halo is thought to be a harbinger of impending tremendous change in African mythology. Several myths from throughout the world believe it is a sign of rain or storm, which is not incorrect.