A protest was staged by several contractual workers of the Atal Bihari Vajpayee Thermal Power Plant in Madwa in Chhattisgarh's Janjgir-Champa district. 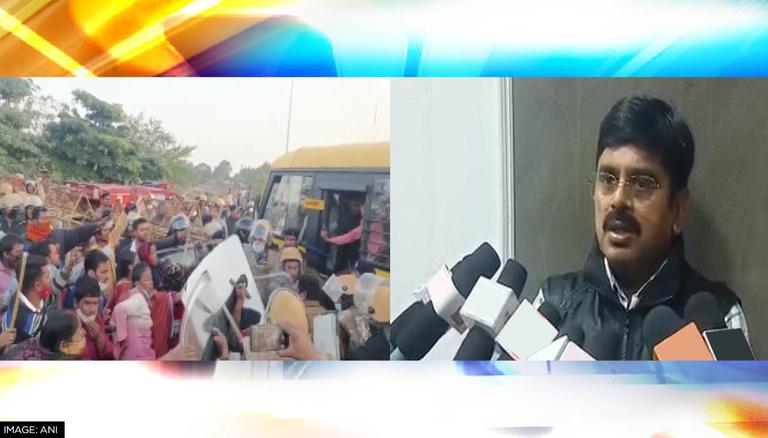 
After a major clash broke out between the contractual workers and police personnel at Madwa power plant in Chhattisgarh's Janjgir district, the situation has now been brought under control and security measures are placed accordingly, informed Janjgir-Champa district magistrate Jitendra Shukla on Sunday.

While briefing the media over the situation, he said that with the District Management Act in force, the protestors have been informed that this type of protest is not correct.

"Many people were stuck inside the factory so we asked them to protest on the other side but they did not listen to us. Also, we used security measures to disperse the crowd after which they started pelting stones which affected the situation for some time, and some police personnel also got injured during this. However, now the situation is in control", he said.

An official release issued by the Director of Public Relations in Chhattisgarh provides comprehensive detail on the overall situation and states that the protests turned violent when the police and the local administration tried to remove the protestors from the site due to a rise in Covid cases.

They also used water canons to remove some workers at the Madwa power plant as few suffering from high BP and diabetes had to be evacuated immediately.

"Protesting workers were supposed to talk to the chairman of Chhattisgarh State Power Company on January 4. However, some of them demanded that the session be held on Sunday through video conferencing. Even after this was arranged, many taking part in the protest refused to vacate the area," it added.

On Sunday, a protest was staged by several contractual workers of the Atal Bihari Vajpayee Thermal Power Plant in Madwa in Chhattisgarh's Janjgir-Champa district. Later, the protests turned violent after the police and local administration tried to intervene and remove the protestors from the site citing COVID-19 reasons. During this, as many as 20 police personnel were injured and several police vehicles were also vandalised. A private vehicle was set on fire as well.

The contractual workers of the plant, which is operated by Chhattisgarh State Power Company, have been protesting for the past several days, demanding their services to be made permanent.