Three men in Delhi on Thursday rescued a couple stuck in a waterlogged road in Mahipalpur. The incident was shared by Facebook user Gurpreet Wasi

Three men in Delhi on Thursday rescued a couple stuck in a waterlogged road in Mahipalpur. The incident, shared by Facebook user Gurpreet Wasi, tells the tale of three heroes. Along with the post, Wasi shared two images. One showing the waterlogged road where the couple was stuck, the other image is of two - among the three - men who initially helped the couple. Since being shared yesterday, the post has captured the attention of netizens. Till now it has got over 1,300 reactions and more than 300 shares – and the numbers are increasing.

In her Facebook post, Wasi wrote: “Rajeev and his wife Shalini were returning home to Gurgaon when they got stuck in the mammoth downpour this evening at Mahipalpur.” She further explained that the couple was unable to move as the car’s engine died and it nearly drowned. While most people stood at the sides “laughing and watching,” three men came forward to rescue the couple.

According to reports, not only the couple were escorted to a safe shelter, but they also pushed the car to higher ground - all these in waist-deep rainwater. “After a few hours of being stranded on the road a rescue vehicle finally arrived and took the car away,” Wasi wrote. Then, another person came forward and dropped the couple home. “Whoever they are, if this post gets to them - so proud of you and you inspire. Delhi redeems itself sometimes!” Wasi wrote in her post’s concluding lines. 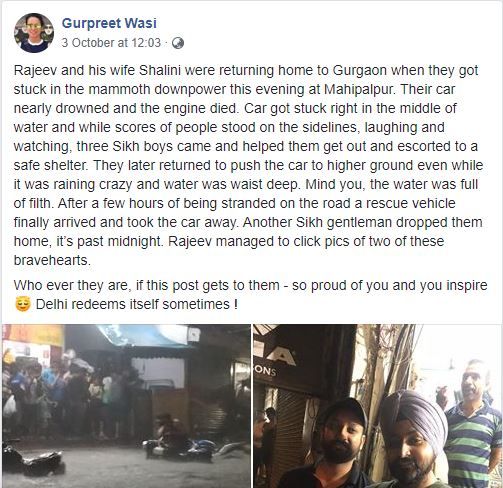 The post has been receiving all sorts of comments and praising the gesture of the men. While some are calling them “real heroes,” others are simply writing “respect’ to show their appreciation. Netizens have reacted in a very positive manner towards this gesture of the youths. “Proud of these youths,” writes a Facebook user. “Great selfless service to mankind. Regards to” comments another. “Faith in humanity restored,” writes a third. “They are real men and real heroes. Keep it up guys!” says a fourth.