Delhi: Video of a woman beating a cab driver is surfacing on social media, where the victim is seen being beaten in the middle of the road in Delhi. 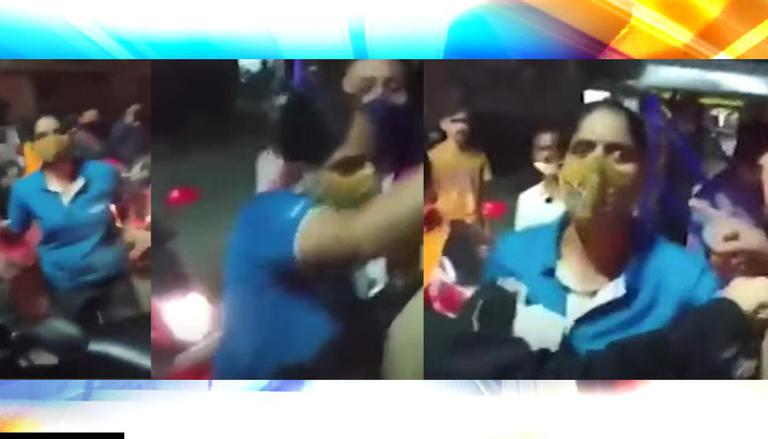 
People displaying violent behavior in public places has become a rather common occurrence. A recent video of a woman thrashing a cab driver has surfaced on social media platforms, where a cab driver is seen being beaten in the middle of the road in Delhi. The incident was recorded on the mobile phone by the bystanders, who even tried to separate the woman who was holding the cab driver's collar.

In the latest viral video, a woman dressed in a blue t-shirt wearing a mask is seen slapping and punching a driver, who did not move an inch to resist the woman hitting her. The bystander who came to stop the fight questioned the anonymous woman's violent behavior, but the woman ended up threatening the bystanders also. She looked at one of the bystanders who was recording the incident, telling him to immediately stop the recording. However, the man did not listen to the woman and captured the entire incident, which is now going viral.

In the video, the woman is seen creating a ruckus in the middle of the main road, making it difficult for passersby to move as her vehicle is seen parked in the middle of the road. The culprit is seen accompanied by another woman who did not stop her from showing unruly behavior instead helped her in beating up the cabbie.

The incident occurred on Kasturi Lal Anand Marg in West Patel Nagar Block-22, Delhi. As per media reports, the main accused, along with another woman, was riding on a scooty. Due to congested roads, the cab driver failed to make space as demanded by the woman who started shouting and screaming. The crowd gathered in the area blamed the woman for taking the laws into her own hands, but this did not stop her from abusing the people in the crowd.

In a similar incident, a video of a woman slapping and punching a driver on the streets of Lucknow went crazy viral on social media. The woman, identified as Priyadarshini, claimed that the driver was driving the vehicle at a high speed and she had narrowly missed being hit by the car. However, the footage of the incident proved that the cab driver was moving at a slow pace and the claims made by Priyadarshini were false. Recently, another video of a girl beating a street vendor went viral, in which the victim was seen being thrashed by a girl who came to the street vendor to eat snacks.