The Federation of Resident Doctors Association (FORDA) said on Thursday that it will temporarily halt its ongoing protest to expedite NEET-PG 2021 Counselling. 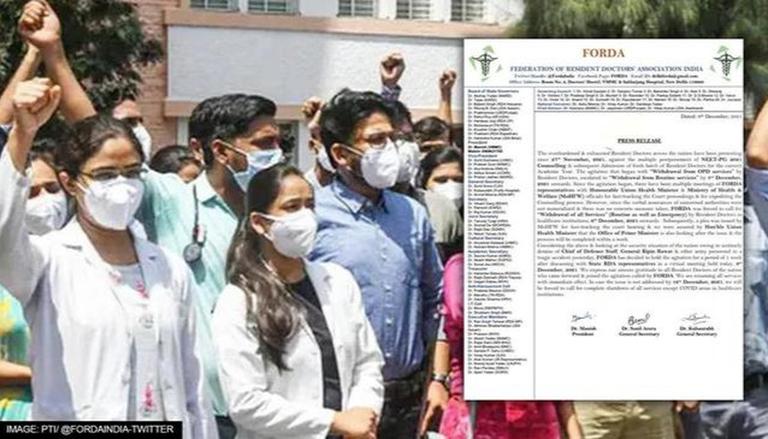 
The Federation of Resident Doctors Association (FORDA) said on Thursday that it will halt its existing campaign to expedite NEET-PG 2021 Counselling for a week. It has also been announced that the resident doctors would resume full service immediately. Dr Manish, President of FORDA, told the media, "We met with the Health Minister yesterday, and he provided us with positive assurances. Therefore, we've decided to put the protest on hold for a week."

He also warned that if no meaningful actions are taken to address the reported delay in NEET-PG 2021 counselling, the protest will resume on December 17. The decision was made after FORDA convened an emergency meeting with several RDA representatives earlier in the day to discuss the next steps in the ongoing protest of resident doctors.

"A plea was issued by MoHFW (Ministry of Health and Family Welfare) for fast-tracking the court hearing and we were assured by the Union Health Minister that the Office of Prime Minister is also looking after the issue and the process will be completed within a week. Considering the above and looking at the security situation of the nation owing to the untimely demise of Chief of Defence Staff, General Bipin Rawat, and other army personnel died in a tragic accident yesterday, FORDA has decided to hold the agitation for a period of 1 week after discussing with State RDA representatives in a virtual meeting held today," a statement issued by FORDA said.

"We express our sincere gratitude to all Resident Doctors of the nation who came forward and joined the agitation called by FORDA. We are resuming all services with immediate effect. In case the issue is not addressed by December 16, we will be forced to call for the complete shutdown of all services except COVID areas in healthcare institutions," it added.

Residents at three central hospitals – RML, Safdarjung, and Lady Hardinge – halted OPD services on November 27 in protest of the continual delays in conducting NEET-PG 2021 counselling. Following the COVID-19 pandemic, admission to several courses in NEET PG 2021 has been postponed indefinitely.