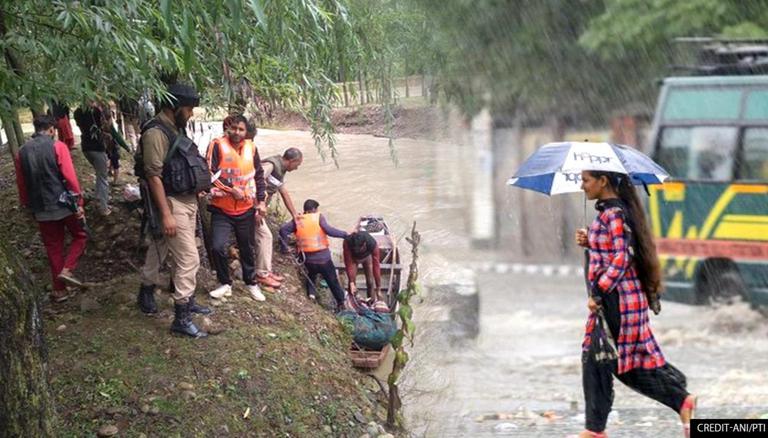 
Following heavy rainfall in the Union Territory of Jammu and Kashmir, the Kulgam Police on Sunday rescued a nomad family along with their livestock after the water levels in the Yath Yathur Nullah rose to an abrupt level. The family was stuck in the local Nullah in the J&K district after which the police party went off for rescuing them.

According to the Kulgam Police, they received a tip after which the State Disaster Response Fund (SDRF) team under the supervision of Station House Officer (SHO)  and Sub-Divisional Police Officer (SDPO) Qazigund rushed to the spot. They were accompanied by the Inspector in Charge (IC) PP Mirbazar, and Sub Inspector Abdul Rashid. The team after reaching the spot rescued five members of the family along with their livestock which was also stuck in the Nullah. The livestock included 200 sheep, one horse, two dogs as well as their essential commodities. They were later shifted to a safer place along with their belongings.

Talking about the same, the Kulgam police released a statement providing details about the rescue operation. It said, "Today at about 6:00 am, the Kulgam police received information that water level in the Yath Yathur Nullah was increased abruptly because of the continuous rainfall during the intervening in the mid-night and a family with their livestock was stuck in the Nullah."  A rescue operation was conducted thereafter.

Several people took to social media sharing images from the rescue operation and lauded the J&K police. The rescued family express their gratitude towards the team.

Rainfall in Jammu and Kashmir

Several districts of Jammu and Kashmir has been receiving heavy rainfall followed by flash floods and cloudburst over the past few days. A man was also killed while many others from his family are still missing after a flash flood hit the Baramulla district in North Kashmir on Sunday.

READ | Indian Air Force to get five landing strips in J&K, Ladakh for fighter and other jets

According to official sources, a cloud burst followed by flash floods struck the Kafarnar Bahk area in Baramulla after which one member of the family got killed and the others went missing. Search operations are ongoing for the missing family members whereas many others as stranded in different parts of the union territory.

READ | J&K L-G Manoj Sinha assesses COVID measures, says 'we must not let our guard down'

Meanwhile, the incessant rain has also affected nearby paddy fields as well as properties in the area.