As heavy rains impacted vegetable supplies, the City market in Karnataka's Bengaluru saw a dramatic increase in costs ahead of the Mahanavami and Vijayadashami. 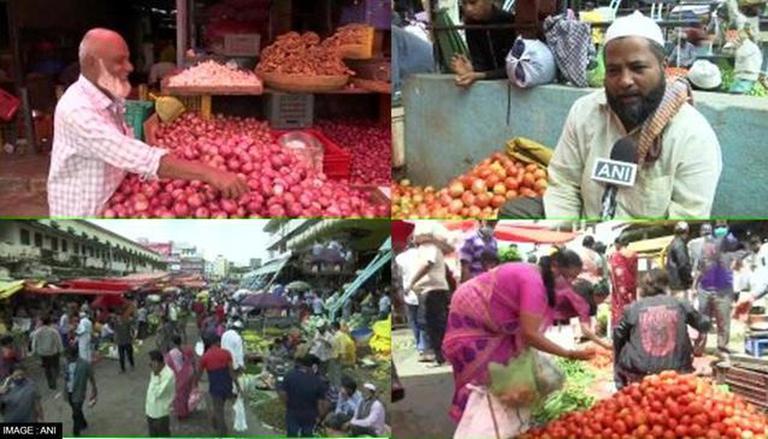 
As heavy rains impacted vegetable supplies in Karnataka, the City market in Bengaluru saw a dramatic surge in costs ahead of the Mahanavami and Vijayadashami celebrations, which are projected to push prices even higher. Onion and tomato prices, which had previously plummeted, surged unexpectedly after rains devastated the crops. Fine quality onions, which were previously priced between Rs 600 and 1,200 per 50 kg, have now been raised to Rs 800-1,500.

"Tomatoes are priced at Rs 40/kg at mandi. We aren't receiving vegetable stock due to heavy rainfall. We hope that prices will reduce after 2 months," says Syed Zabiullah, a vendor pic.twitter.com/x8kKJQ627Y

"Tomatoes are priced at Rs 40/kg at mandi. We aren't receiving vegetable stock due to heavy rainfall. We hope that prices will reduce after 2 months," Syed Zabiullah, a vendor was quoted as saying by ANI. Tomato prices have soared from Rs 20 to Rs 80 per kg in the previous two weeks at the Kalasipalya market. It is likely to reach Rs 100 by Diwali week.

The majority of veggies for the city come from Hoskote, Malur, Kolar, Sidlaghatta, and Anekal. According to vegetable vendors, the prices of most vegetables in Kalasipalya market have increased by 50%. Customers ordering through app-based or online vegetable marketplaces, on the other hand, benefited substantially from the drastically decreased pricing, said reports. On Sunday, hybrid tomatoes were offered at Rs 23 per kg on the popular website Big Basket, while organic tomatoes were priced at Rs 44 per kg, according to reports.

A torrential downpour in the city on Monday, October 11, flooded Kempegowda International Airport in Bengaluru, revealing the civic agencies' lack of preparedness and planning. The road to the airport was flooded, making it difficult for people to reach there. Due to the fact that several cabs were stopped on the roads, passengers were forced to take tractor rides to make their flight. Flights departing between 10 pm and 11 pm were delayed owing to adverse weather, while inbound flights were ordered to go around. There was no problem while landing since the tarmac was not flooded. Flights to Chennai, Pune, Hyderabad, Mangaluru, Mumbai, Kochi, and Panaji were all delayed.