On Monday, October 18, a pregnant woman was saved from slipping into the gap between the train and the platform by the Railway Protection Force (RPF). 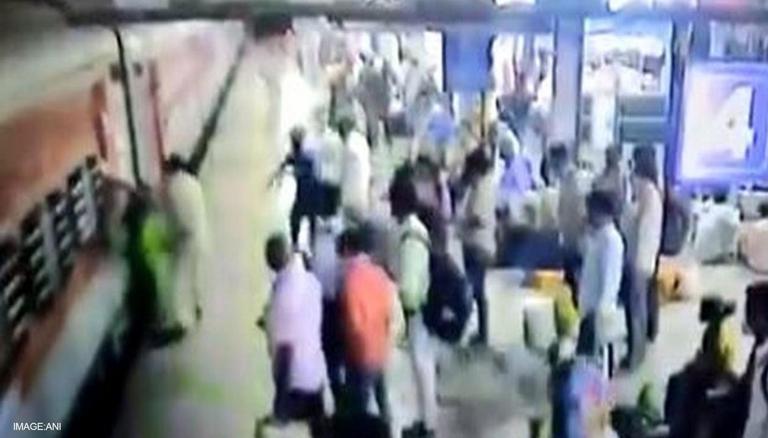 
On Monday, October 18, a pregnant woman was saved from slipping into the gap between the train and the platform by a Railway Protection Force (RPF) constable at a railway station near Mumbai, according to CCTV footage. The incident occurred when the woman collapsed and almost slipped into the gap while attempting to deboard a moving train at the Kalyan Railway Station. In the footage it can be seen that the pregnant woman staggers as she tries to exit the train, unable to maintain her equilibrium. RPF constable SR Khandekar leaps into action to save her.

The CCTV clip was posted by Shivaji Sutar, Chief Public Relations Officer of Central Railway in Mumbai, who urged passengers not to board or deboard a running train. The RPF personnel have been getting praise from netizens after the clip of the incident was posted online. "Railway Protection Force (RPF) staff SR Khandekar saved the life of a pregnant woman who had slipped while attempting to de-board a moving train at Kalyan railway station today. Railway appeals to passengers not to board or de-board a running train," Shivaji M Sutar tweeted.

Railway appeals to passengers not to board or de-board a running train.@RailMinIndia pic.twitter.com/68imlutPaY

I really appreciate the alertness of the officer it's great to see them so alert and fast. One more thing such things keeps happening on daily basis at Kalyan Stn issue needs to be studied and needful steps must be taken.

The Railway Protection Force Act of 1957, passed by the Indian Parliament for the improved protection and security of railway property and passenger areas, formed a security force. The Railway Property (Unlawful Possession) Act of 1966 and the Railways Act of 1989 give it the power to search, arrest, investigate, and prosecute anyone who violates them. On the other hand, the state police's Government Railway Police (GRP) has the jurisdiction to conduct arrests under numerous criminal laws. The force is under the control of the Indian Ministry of Railways.

The Indian Railway Protection Force Service (IRPFS) employs all Railway Protection Force officers, who are selected through the UPSC Civil Services Examination. They are hired as Central Civil Servants in Group A. The role of Director-General of the RPF, on the other hand, is held by a senior Indian Police Service (IPS) official on deputation. Sub-inspectors and constables are among the positions that are recruited for. The Ministry of Railways, Government of India, conducts numerous exams for such recruitments.