PM Modi, US VP Kamala Harris To Be Invited For 'hybrid' Bengaluru Tech Summit 2021 In Nov 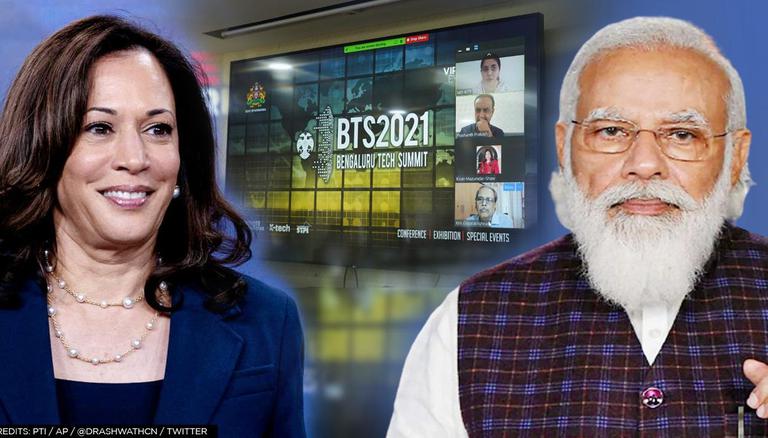 
Karnataka Deputy CM Ashwath Narayan unveiled the dates for the highly-anticipated Bengaluru Tech Summit 2021 on Monday and revealed that PM Modi and US Vice President Kamala Harris would be invited to the event. Noting that the 2021 edition of the Bengaluru Tech Summit was an online-offline hybrid model, the Karnataka Deputy CM said that the event was scheduled to take place on November 17, 18, and 19.

PM Modi, US VP Kamala Harris to be invited for Bengaluru Tech Summit 2021

Union Ministers Nirmala Sitaraman, Ravishankar Prasad, Harsh Vardhan and Nitin Gadkari, among others, would be invited to participate in the programmes, Narayan added.

In view of the possible third wave of the COVID pandemic, the conclave Driving the Next would be organised in the hybrid format comprising more of virtual and a part of the physical model, the Deputy Chief Minister was quoted as saying by his office in a release. Last year, the event held in virtual mode for the first time evoked an overwhelming response from experts and delegates, and more than 25 countries had participated. This is expected to further increase in the forthcoming event, he added.

The iconic #BengaluruTechSummit2021 dates announced! It is on November 17th, 18th and 19th 2021 in an online-offline hybrid model.

The BTS event has emerged as the leading technology event in the country to watch out for. Discussed the event modalities today. @BSYBJP @ITBTGoK pic.twitter.com/YLB1j1piCc

According to the release, the first day of the summit would be Thought Leadership Day (Hall of Fame), the second day would be 'Technologies and Strategies Day (Hall of Techies), and the third StartUps Day (Hall of Future). Prior to these, Beyond Bengaluru events would be conducted in Mysuru, Hubballi, and Mangaluru during September and October. The dates would be decided upon shortly.

During the Beyond Bengaluru events, the reports pertaining to Karnataka Digital Economy Mission (KDEM), Engineering R&D, and IESA (Indian Electronics and Semi-conductor Association) would be released, he said. To give prominence to academic participation in the events, it has been decided to involve Visvesvaraya Technological University (VTU) and Higher Education Council, the release said.