The 'Margazhi Ashtami Car Festival' at the Madurai Meenakshi Amman Temple in Tamil Nadu drew a large crowd today. This event has drawn a large attendance. 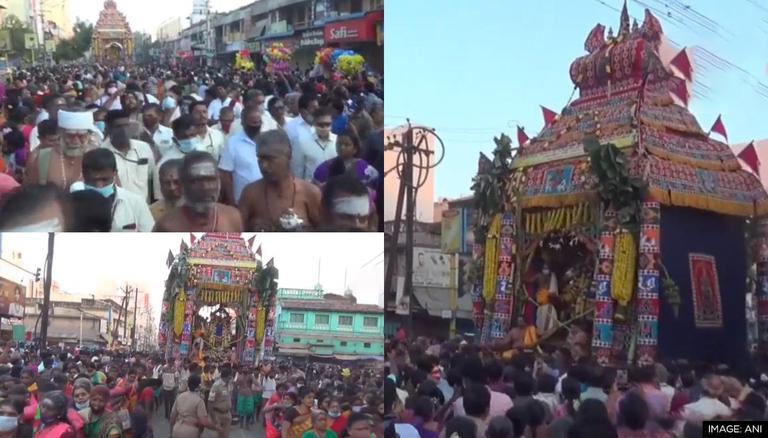 
The 'Margazhi Ashtami Car Festival' at the Madurai Meenakshi Amman Temple in Tamil Nadu drew a large crowd today. This event has drawn a large attendance. Despite the growth in Omicron cases in the country, COVID-19 principles such as social distancing were not being observed at the event site.

The festival is a celebration for the month of Margasheersha, known in Tamil as Margazhi, which began on November 26. In Hindu culture, Margasheersha is considered auspicious for dedicating one's spiritual growth to Shiva, Shakti, Vishnu, and others, whether through Sadhana, Vrata, Bhajan, or Pooja.

Arulmigu Meenakshi Sundareshwarar Temple is a historic Hindu temple in Madurai, Tamil Nadu, located on the southern bank of the Vaigai River. It is dedicated to Goddess Meenakshi, a Parvati form, and her spouse Sundareshwar, a Shiva form. The Goddess temple is described in 6th-century CE documents and is located in the heart of the ancient temple city of Madurai, documented in Tamil Sangam literature.

At least 18 of the 34 Covid-19 patients infected with the novel Omicron strain have been discharged from hospitals. All active cases with an S-gene decrease, who are suspected of being infected with Omicron, are being treated. This featured veteran actor Vadivelu and some of his film crew, who had lately returned from the United Kingdom.

Chief Minister M K Stalin reviewed the infrastructure, facilities, and availability of medical oxygen on Sunday in order to combat the Omicron strain. A total of 1.15 lakh beds are available, with plans in place to build an additional 50,000 beds if necessary, according to an official statement.

On Sunday, 610 people in Tamil Nadu tested positive for COVID-19, which was higher than the previous two days' figures. Multidisciplinary central teams have been dispatched in 10 states, including Kerala, Tamil Nadu, Maharashtra, Mizoram, West Bengal, Karnataka, Uttar Pradesh, Bihar, Jharkhand, and Punjab, in response to an increase in coronavirus and Omicron cases.

As a result of the outbreaks, state administrations have already begun reimposing night curfews and restrictions in order to combat the virus' spread.