Cycle rally was organised in Agartala on Oct 11 as part of the Azadi Ka Amrit Mahotsav, which commemorated the country's 75th year of independence. 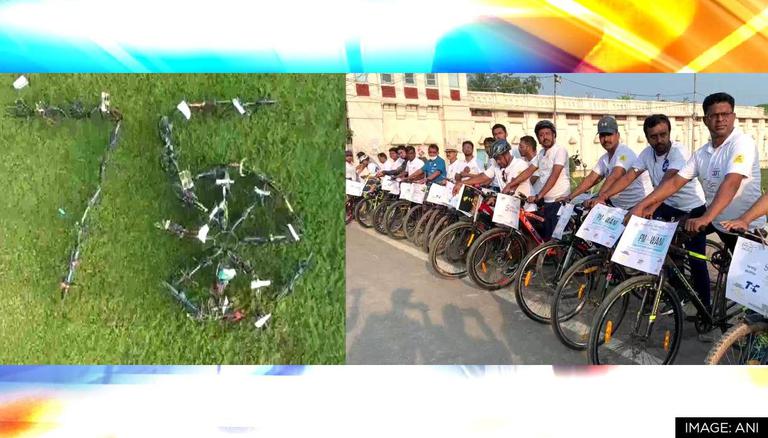 
A cycle rally was organised in Agartala on Monday, October 11, as part of the Azadi Ka Amrit Mahotsav, which commemorated the country's 75th year of independence. BSNL and the Agartala Cycloholics Foundation collaborated to organise the rally, which intended to popularise cycling and raise awareness about it.

Mukesh Kumar, the General Manager of BSNL Tripura, kicked off the demonstration. Kumar, speaking at the event, remarked, "The country is celebrating Azadi ka Amrit Mahotsav, so, the department of telecommunication has asked all the operators to take part in the cycle rally."

Dept of Telecommunications asked all telecom operators to take part in a cycle rally in Agartala. All operators including BSNL participated in it: GM, BSNL Tripura (11.10) pic.twitter.com/VZ0M996ZCe

Gopesh Debnath, the founder of the Agartala Cycloholics Foundation, asked the government and authorities to encourage people to use bicycles as a mode of transportation. The rally began at the Ujjayanta Palace's main gate in Agartala and proceeded through the streets of the capital city. The rally attracted a significant number of cyclists of all ages.

Satyam Singh, a participant, "Cycling gives you holistic independence, independence from parking issues independence from bad health, etc. That is the message we are carrying through this rally. I request the state and central authorities to make the cycle lanes for the safety of rallies."

On Saturday, October 9, the Territorial Army (TA) held a cycling rally in New Delhi to honour its 72nd Raising Day in the 75th year of independence. The purpose of this bike rally was to spread the message of the "Swasth Bharat Abhiyan." The rally was headed by Lieutenant General Preet Mohindera Singh, Director General of TA, from India Gate. The rally emphasised the need of a healthy lifestyle and athletic activity, especially in light of the global Coronavirus pandemic.

Last week, from the National Police Memorial in Delhi, the Director-General of the Indo-Tibetan Border Police (ITBP) began the fourth phase of the force's longest cycle ride. This rally will travel 2,700 kilometres from Gogra (Ladakh) to Kevadia (Gujarat) on October 31 to participate in the National Unity Day Parade. The bicycle ride began on August 27 at 4,500 metres in Ladakh and travelled through difficult weather and terrain before reaching Manali via the Atal Tunnel.