A large crowd gathered in Varanasi to observe the second Monday of the 'Sawan' month. The devotees crowded the temple and the banks of the river Ganga. 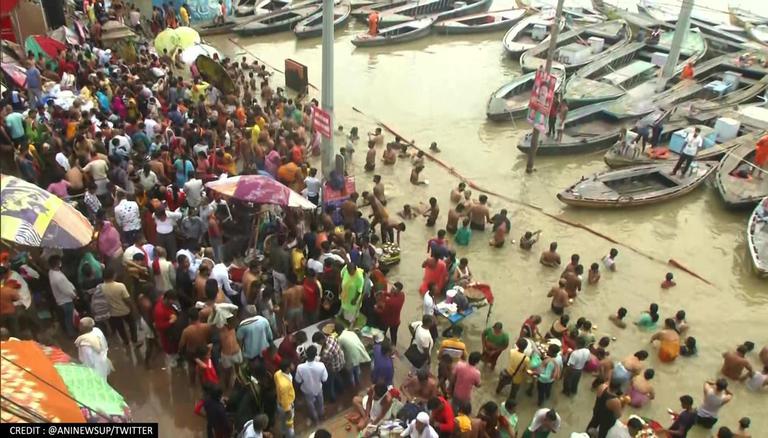 
A large crowd gathered in Varanasi to celebrate the second Monday of the 'Sawan' month. The crowd of devotees queued up outside the Kashi Vishwanath Temple to offer their prayers, while many stationed themselves at the banks of the river Ganga to take a holy dip in the water. In the pictures released by ANI, it can be seen that the majority of devotees are not wearing a mask and are not following any sort of COVID-appropriate behaviour. The timing of the gathering is not ideal as, after weeks of continuous decline, the previous week accounted for a 7.5% increase in the total COVID-19 cases across the country.

Huge crowd of devotees seen in Varanasi as they take a holy dip in Ganga river and queue up to offer prayers at Kashi Vishwanath Temple on the second Monday of ‘Sawan’ month pic.twitter.com/VCToOf4Ei2

The events in the early hours of Monday will land a blow to the people of Uttar Pradesh as there have been multiple instances where a possible gathering of a large crowd for religious purposes was avoided. Like last year, the annual Kanwar Yatra was again cancelled this year in Uttar Pradesh. The Supreme Court denied the Uttar Pradesh government the right to hold the Yatra saying that it was not possible to hold 100 per cent physical Kanwar Yatra in view of Covid." The Supreme Court also said the Right to Life is more important than religious sentiments. The yatra was scheduled to start on July 25 and continue until the first week of August. It is attended by thousands of Shiva devotees as they travel to adjacent states along the banks of river Ganga. After the verdict, the Uttar Pradesh government said that it was in constant contact with the organisers of the yatra and said that it was the organisers themselves who cancelled the yatra last year.

To not allow a third wave of the coronavirus pandemic to erupt, UP Directorate General of Police (DGP), Mukul Goel released guidelines on Sunday, which said that religious activities during Muharram should be performed with COVID appropriate behaviour. The DGP said that the devotees must follow the COVID protocols and follow social distancing. The 10-day mourning period will begin on August 10. The release also said that DGP Mukul Goel has asked the officials under him to hold discussions with the religious leaders to spread awareness about COVID-19 protocol and that it would be preferable to observe Muharram indoors. Police teams will be deployed in certain areas where the officials suspect that the occasion might urge a large gathering.