A mentally disturbed woman standing in the middle of a railway track while a Mumbai local approached her in speed, was saved by an alert policeman on Saturday 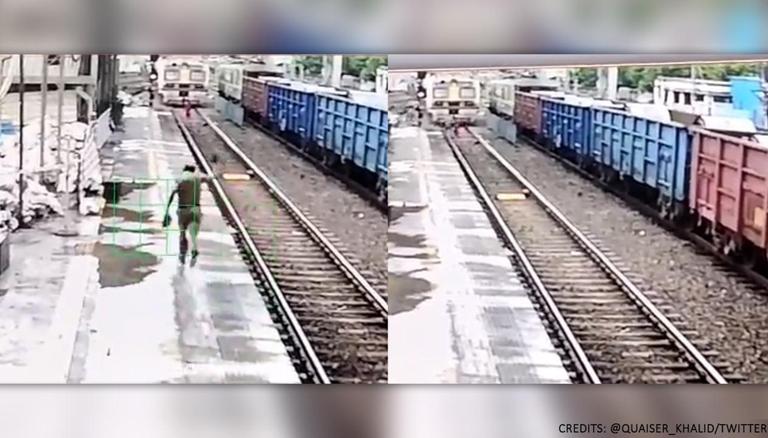 
A mentally disturbed woman standing in the middle of a railway track while a local train approached her in speed, was saved by an alert policeman at Vasai Road station in Mumbai. A video of the incident, which took place around 10 am on Saturday, was shared by Railway Police Commissioner on Twitter.

The Dahanu-Andheri local train was approaching the Vasai Road railway station when Head Constable Eknath Naik, who was on patrolling duty on platform number 5, saw the woman standing in the middle of the tracks. Some policemen on a rail over-bridge nearby also alerted Naik about the same.

The officer immediately signaled the motorman to stop the train and ran to the spot. He pulled the woman up on the platform in the nick of time, while the train came to a close halt.

Two constables of the Railway Protection Force (RPF) also rushed to help the Naik. When enquired, the woman identified herself as Subadra Shinde, who lived alone in the Vasai area of Palghar who was suffering from mental stress.

Head Constable Naik @grpmumbai posted at Vasai Road police station displayed exceptional presence of mind and courage in saving a lady commuter who was on the track from death. He waved the motorman to stop the train while running and pulling out the lady. He is being rewarded. pic.twitter.com/t4LYCCd6f0

Senior police officials lauded Naik for his courageous act. The video of the incident has gone viral on social media. The policeman later told reporters he felt happy that he could save the woman's life, and thanked his colleagues and the RPF personnel for their support.

RPF Commissioner Quaiser Khalid informed that Head Constable Naik is being rewarded for his exceptional presence of mind and courage in saving the woman's life.

The RPF is known for saving people from similar incidents. There have been multiple instances when alert RPF constables have either saved or rescued people from such accidents. Earlier in July, an RPF constable saved the life of a passenger who fell while trying to get down from a moving outstation train. The incident took place at Mumbai's Borivali Railway Station on the Western Line on June 29, Central Railway sources said. The passenger was dangerously close to the gap between the moving train and the platform when the constable pulled him away, thereby averting a tragedy.

#WATCH | An RPF constable saved life of a passenger who fell while trying to get down from a running at Mumbai's Borivali Railway Station on June 29. The passenger was dangerously close to the gap between the train & platform when the constable pulled him away: Central Railway pic.twitter.com/AVnYIwNQ7y