A layer of toxic white foam continued to float on the surface of the Yamuna river near Delhi's ITO ghat on Tuesday morning amid Chhath Puja celebrations. 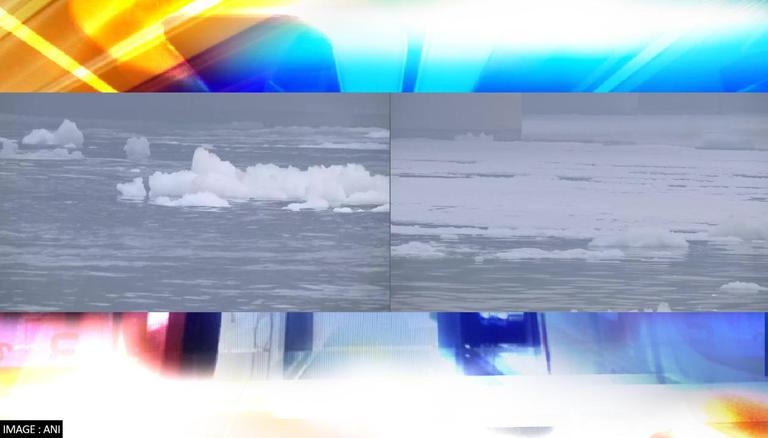 
A layer of toxic white foam continued to float on the surface of the Yamuna river near the ITO ghat in Delhi on Tuesday morning. During the four-day Chhath Puja festival, a huge number of vulnerable worshippers were forced to immerse themselves in the toxic foam that flowed over the river Yamuna, to pray to the Sun deity.

Devotees took a dip in the Yamuna river, which was covered in a thick layer of toxic foam, at Kalindi Kunj on Monday, the first day of Chhath Puja. Residents expressed their dissatisfaction with the water quality of the river. According to experts, the toxic foam is generated by a high phosphate content created by industrial pollutants flowing into the river.

Ammonia levels in the Yamuna river have also been growing. A layer of foam had been noticed several times before due to the general increase in the river's pollution levels. People have been sharing photos and videos of the toxic foam on Twitter, as well as criticising the Arvind Kejriwal-led government.

Layer of toxic white foam continues to float on the surface of Yamuna river near ITO in Delhi pic.twitter.com/HhVQa097j7

Amit Malviya, head of the BJP's national information and technology department, lashed out at Delhi Chief Minister Arvind Kejriwal for the lack of preparations for Chhath Puja. "Nothing seems to be working in Delhi. Debilitating air pollution, toxic foam in Yamuna and 1,172 cases of dengue in the last one week," he wrote on Twitter.

Nothing seems to be working in Delhi. Debilitating air pollution, toxic foam in Yamuna and 1,172 cases of dengue in the last one week. Arvind Kejriwal has so far even refused to reduce VAT on petrol and diesel.

BJP MLA Manoj Tiwari said on Monday that his 'heart was broken' after taking a boat trip in the hazardous foam-covered Yamuna ahead of Chhath Puja festivities. Criticising the Aam Aadmi Party-led Delhi government, Tiwari claimed that prohibiting Chhath Puja celebrations was an attempt by CM Arvind Kejriwal and Deputy CM Manish Sisodia to hide the River Yamuna's critical status.

Following that, the AAP-led Delhi government held a press conference in which it slammed the BJP. Delhi Deputy Chief Minister Manish Sisodia maintained that, contrary to the BJP's portrayal, Chhath will be celebrated on a grand scale in Delhi.

Notably, the parties have been at odds since the DDMA, led by L-G Anil Baijal, issued orders last week allowing public celebrations of Chhath Pooja only in defined sites, which exclude any venue along the Yamuna's banks.

Chhath Puja, which is dedicated to the Sun God, drew people from Bihar, Jharkhand, and the adjacent territories of Uttar Pradesh. In Hindu tradition, devotees worship the Sun God and his wife Usha to express appreciation and seek their blessings. Devotees gather and take a holy bath in rivers, ponds, and other water bodies during the four-day festival. The 'Nahai Khai' ceremony will take place on November 8 and will be followed by the 'Usha Arghya' ritual on November 11. The main ceremony will be the presentation of 'argha' to the Sun God on November 10.

(With inputs from ANI, Image: @ANI/Twitter)