Dance, Music, And Caution - As Children Return To Schools After 19-month COVID Break

From tiny tots to junior wing students, children in Delhi were excited to be back in schools on Monday after the prolonged closure of over 19 months due to the coronavirus pandemic. 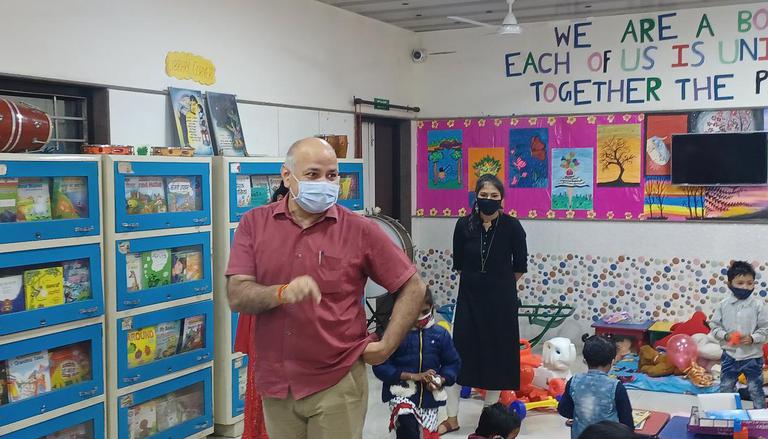 
From tiny tots to junior wing students, children in Delhi were excited to be back in schools on Monday after the prolonged closure of over 19 months due to the coronavirus pandemic.

While several schools reopened with 50 per cent strength on Monday, majority of privately-run schools have deferred the reopening to post-Diwali.

According to government officials, students came to schools in large numbers but they practiced a lot of caution -- masks, thermal scanning, and volunteers guiding staggered entry and exit for students were common sights at the schools.

Some schools welcomed the students with dance and music, while others decided to screen films like "Tare Zameen Par" for the students. Many other activities were also organised to help the children connect with their schools, before resuming physical education.

"It was an emotional moment to see students laughing and enjoying in classrooms. We welcome all students back to school," Delhi Education Minister Manish Sisodia tweeted Chief Minister Arvind Kejriwal said the childhood of kids is incomplete without visiting schools. "We have to leave the tough time behind and move on," he tweeted in Hindi.

READ | Schools reopen in Delhi, Tamil Nadu & Kerala after months of closure due to COVID-19

This is what kids were missing….

You must watch this video and see why it was important to open the schools …. https://t.co/7DCMA5FfzJ pic.twitter.com/NPBtvpi7eC

"Finally!! It's time to come back to school. Today children have returned to schools after almost one and half year. It was an emotional moment to see students laughing and enjoying in classrooms. We welcome all students back to school," Sisodia tweeted.

READ | Many students back to Delhi school after 19-month gap, others wait till Diwali

At the school's primary wing, Sisodia spent time with children where one student turned doctor for him while the education minister played a patient.

"Met this special Doctor today in a school class room. Full body check-up, injection, medicine prescription, and instructions to 'avoid icecream'...God…I was missing this…," Sisodia tweeted while sharing a few pictures showing the student examining him using a toy stethoscope.

Sisodia said the students are already facing a knowledge gap, which would only widen if schools were not reopened now.

“The government is alert and committed to ensure children's health and safety. It will be ensured that all schools follow all COVID-19 protocols and observe social distancing. If there is any third wave or rise in cases, schools can be closed again,” he said.

An overwhelming positive response was observed on the very first day of schools reopening, which demonstrates the parents’ confidence in sending their children to school, he said.

At the Government CO-ED Senior Secondary School, Lajpat Nagar, a class 8 student said, "I am excited to attend school regularly henceforth. It felt good to be back after almost two years." “Online classes were definitely useful but during physical classes, we can always clear our doubts then and there. Due to network issues, sometimes, we don't get a clear picture of what's going on and it is quite tiring for eyes to keep looking at the screen for so long," the student said.

Another student, who was equally excited to join school, said, “Even during Covid times, our teachers did take all efforts to take our classes sincerely and give us attention individually too. We could approach them individually to clear our doubts.” “Even though they were available, we still felt something was missing -- the fun of meeting our friends and coming to school. I hope the classes don't get affected because of the possibility of third wave".

Teachers at many Delhi government schools said even though the attendance was low on the first day of reopening, they expect more students after Diwali. They said they are making all efforts required to bring them back to classrooms just like earlier but this time keeping Covid-19 protocols in practice.

The Delhi Disaster Management Authority (DDMA) had last week announced that schools would reopen for all classes from November 1, even though teaching and learning would continue in blended mode.

The DDMA had also said that schools would have to ensure that there is not more than 50 per cent attendance in a class at one point of time and no student is forced to attend physical classes.

Following a marked improvement in the COVID-19 situation in the national capital, the Delhi government had announced the reopening of schools for classes 9 to 12, colleges and coaching institutions from September 1.

However, this is the first time after March 2020 that schools in Delhi are reopening for classes upto 8.

Allowing only 50 per cent students per classroom, mandatory thermal screening, staggered lunch breaks, alternate seating arrangement and avoiding routine guest visits are among the guidelines announced by the DDMA for the reopening of schools.

The DDMA has said students, teachers and non-teaching staff living in Covid containment zones will not be allowed to come to schools and colleges.

It has also said the area being used for activities like ration distribution and vaccination should be separated from the area that will be used for academic activities.