Deepa P Mohanan is on a hunger strike since October 29 after a varsity teacher allegedly denied her access to resources needed to complete her doctoral studies. 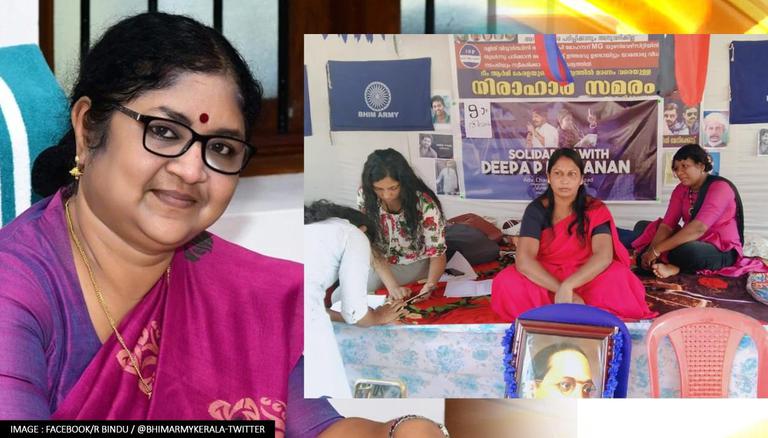 
Assuring to take account of the matter and the complaint filed, Kerala Higher Education and Social Justice Minister R Bindu on Saturday reached out to the Dalit Ph.D. student of Mahatma Gandhi University, who is sitting on a hunger strike opposing the alleged casteism faced by her.

The student, Deepa P Mohanan, has been on a hunger strike since October 29 after a varsity teacher allegedly denied her access to resources needed to complete her doctorate as she "belonged to the Dalit community". She had claimed that her doctoral studies have been delayed due to caste discrimination by certain varsity officials.

In a message posted on social media, Higher Education Minister R Bindu said that the state had intervened to ensure that MG University authorities stand by the student, look at the issue from her perspective, and resolve her concerns accordingly.

"In connection with the hunger strike by Deepa P Mohanan, a Dalit student at MG University, the university authorities have looked into the matter and tried to infrastructure it was resolved. The Vice-Chancellor assured Deepa that she would be given the opportunity to complete her research without any mental or technical hindrances and that she would be provided with all the necessary infrastructure, including library-lab-hostel facilities while taking her into confidence."

Govt focusing on resolving the matter at the earliest: R Bindu

The Minister said that the strike has disrupted activities in the university and that the government intends to come to a conclusion on the matter at the earliest.

"Deepa has demanded action against the teacher. The strike has been going on for a long time and activities in the university have been disrupted. Earlier, Deepa had lodged a complaint with the High Court and the Scheduled Castes and Scheduled Tribes Commission. In view of this, the government aims to resolve the student's complaint as soon as possible."

The Minister added that the state government is concerned about the health of the student. "Personally, I'm concerned too. As soon as we get an explanation from the university, we will do the needful to ensure justice for the student," she said.

The Kerala Minister requested the student to withdraw her strike with this assurance. "Deepa cannot be met in person as she was hospitalised after testing positive for COVID-19," she said.