'I Will Fight Like A Soldier To Remove Misrule Of BJP,' Writes Priyanka Gandhi In An Open Letter To The People Of Uttar Pradesh

Priyanka Gandhi, the General Secretary of Uttar Pradesh (East) penned an open letter saying that she is coming to the state to meet the people and hear out their woes in direct communication, further adding how all the sections of the society are reeling under the misrule of BJP.

Priyanka Gandhi, the General Secretary of Uttar Pradesh (East) penned an open letter saying that she is coming to the state to meet the people and hear out their woes in direct communication, further adding how all the sections of the society are reeling under the misrule of BJP.

The letter further read that the younger Gandhi sibling would work as a soldier to change the political dimension of Uttar Pradesh as because of the politics in Uttar Pradesh, the youth, women, farmers and workers are distressed and their voices are far from the policies of the state. 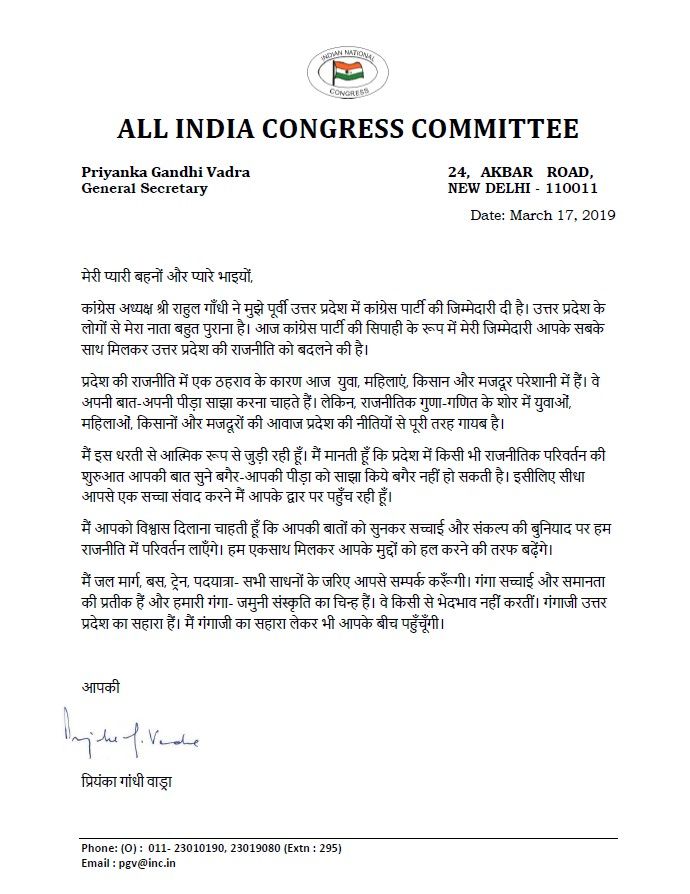 Priyanka will be kick-starting the campaign for Lok Sabha elections 2019 from Prayagraj.

She is slated to visit Prayagraj on March 18th from where she will also take a boat ride and meet people living along the holy river, Ganga.

She will be exploring ways to reach out to the electorate by covering a 3-day, 140 km long 'ganga-yatra' on a steamer boat, starting with Chhatnag in Prayagraj on March 18

During her visit, she is likely to also visit the Nehru family's ancestral home Anand Bhawan in the city.

After Prayagraj, Priyanka will head to Varanasi covering the Lok Sabha seats adjoining the district.

In Varanasi, Priyanka is expected to visit various Temples and Ghats, however, no official word of her schedule in Varanasi has been released yet by the party.

She is expected to return back to Delhi on March 20th.

Ahead of her Prayagraj visit, she will also be meeting booth level workers of the party in Lucknow.

As per party sources, the daylong meeting in Lucknow will focus on election management and strengthening the party in the state.

As of now, the Congress party has decided to contest all 80 Lok Sabha seats at stake in Uttar Pradesh after the Samajwadi Party (SP) and the Bahujan Samaj Party (BSP) announced their seat-sharing arrangement without making Congress a part of their alliance. The two parties have agreed to not field their candidates from Rae Bareli and Amethi.

The Lok Sabha elections, which are due in April-May, will see a high voltage campaign in Uttar Pradesh this time around, where the BJP and its ally had almost swept by winning 74 seats in 2014. The Congress and the SP had won two and four seats respectively, while the BSP drew a blank.