Ahead of the Jharkhand Assembly election results, sources on Monday have said that the Bharatiya Janata Party is in touch with Jharkhand Vikas Morcha (JVM-P) chief Babulal Marandi. According to sources, Marandi can play a bigger role by siding with BJP. It is very tough for the BJP to gain a majority in this polls and so there are greater possibilities for them to ally with JVM. The BJP which had a fallout with its ally AJSU and LJP faces the formidable combination of Congress and JMM.

Earlier today, speaking to Republic TV, JVM-P chief Babulal Marandi said that he keeps talking to the leaders of other parties. His remark comes as he leads as per early trends. Earlier, sources said that BJP top leaders are in touch with Babulal Marandi.

Marandi, a former chief minister and president of JVM-P, had earlier claimed that the opposition parties did not show any interest when he tried to talk to them soon after the Lok Sabha elections. He had also ruled out a possibility of a post-poll alliance with the BJP. While speaking to Republic TV, he also said: "This is just the beginning, let the results come in then we will decide." 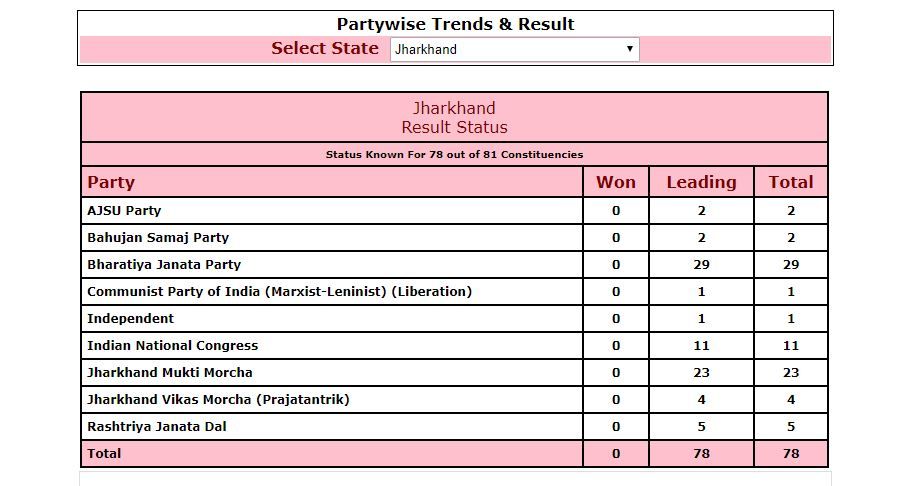 The results for the 81-seat Jharkhand State Assembly will be announced on Monday. Polling was held in 5 phases on November 30, December 7, 12, 16, 20. The BJP which had a fallout with its ally All Jharkhand Students Union and Lok Janshakti Party, faces the formidable combination of Congress, Jharkhand Mukti Morcha (JMM) and other parties like LJP, AJSU, JVM. CM Raghubar Das who is eyeing his second consecutive term faces a tough challenge from former CM and JMM chief Hemant Soren.