National Approval Ratings: In Uttarakhand, BJP-led NDA Projected To Be At The Top Of The Order Leaving UPA Down To Zero

Republic TV and CVoter have released the National Approval Ratings which captures the mood of the nation if the elections were to take place in March.

With the dates for the all-important Lok Sabha polls now announced, the various political parties and the citizens of India have complete clarity on exactly when the country will once again undertake the largest exercise in democracy anywhere in the world. To present a snapshot projection of where the various parties stand at the moment in different states, Republic TV and CVoter have published the National Approval Ratings which present a complete picture of what would happen if elections are held today.

With 5 seats in its kitty, here is the projection for the state of Uttarakhand: 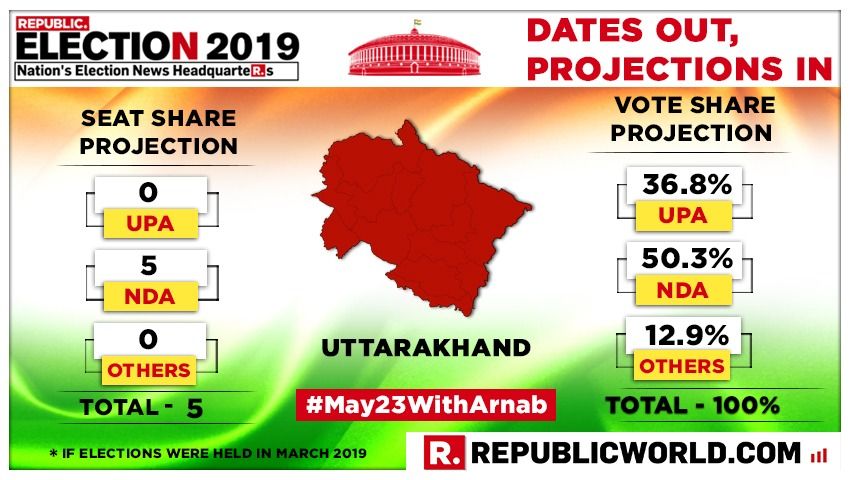 January edition: Uttarakhand, which has five seats in the Lok Sabha, was clean sweeped by the BJP-led NDA in 2014. And as per the January edition of the National Approval Ratings, the situation was projected to remain the same.

NDA: Nothing has changed for the party/alliance which won all the seats in 2014. In each and every edition of the NAR, they have been projected to clean sweep the state with close to 50% of votes. And in January, it is projected to remain the same.

UPA: The Congress-led UPA, across all the editions of the NAR, has been projected to not win even a single seat.

The months preceding the latest National Approval Ratings have witnessed a number of massive developments that may have a big impact on the on-ground sentiment as the phase-wise voting approaches. A parallel CVoter survey has already indicated that citizens' satisfaction with the performance of Prime Minister Narendra Modi has been on an upswing since the Feb 1 budget where a number of significant announcements were made - especially for farmers and for middle-class taxpayers. This satisfaction index the skyrocketed following India's air-strike against Pakistani terror bases across the LoC. Simultaneously, the satisfaction index of Congress president Rahul Gandhi has spiralled downward in the same time-frame.