In this month's National Approval Ratings, Cvoter along with Republic conducted a survey asking who is the most suitable candidate for the post of Prime Minister of India.

With elections less than three months away, the pollsters asked who is the best-suited candidate for the position of Prime Minister of India.

The survey was done from January 1 till March 7 2019, during which important events such as the Budget and the Indian Air Force's strike on Pakistan based terror camps happened.

PM Narendra Modi has consistently dominated the survey, with Rahul Gandhi coming a distant second. Others in the running are Congress leaders Priyanka Gandhi, Sonia Gandhi, Manmohan Singh, BSP chief Mayawati, TMC chief Mamata Banerjee, AAP chief Arvind Kejriwal, TDP chief Chandrababu Naidu, and RJD's Lalu Prasad Yadav. People in the sample for the approval ratings have given them dismal figures with each of the leaders, getting less than 3% of the pie.

PM Narendra Modi has received close to half of the votes throughout the two month duration of the survey. Following the important events, his share of the votes which was 46% on Day one increased gradually and sky rocketed to close to 62% on the final day of the survey, 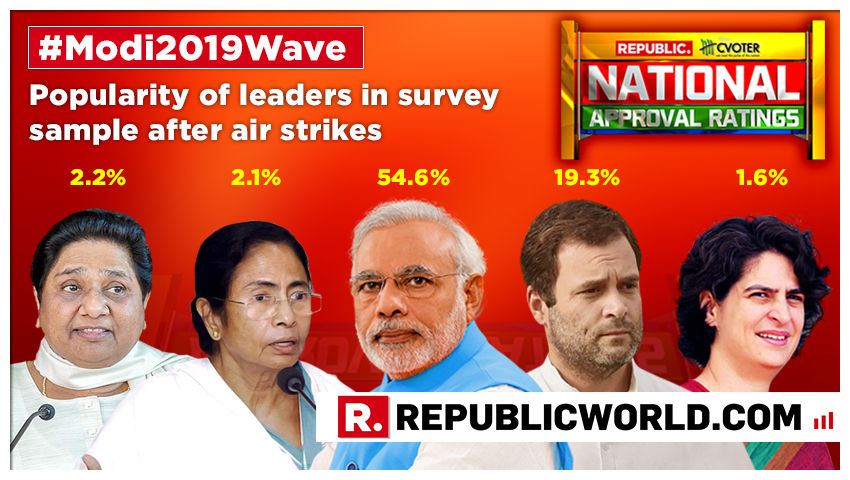 Here are the highlights:

As per the survey, PM Narendra Modi who gets a steady voting percentage of around 48% in the survey sees a spike following the Budget. 48.6% of the voters in the sample approved of PM Modi on the day of the Budget. The number of people who have considered PM Modi fit to be the next Prime Minister rises steadily in the next few days as in less than ten days, on February 9, the percentage of people supporting him for PM rises to 51.4%.

The close to three percent increase in the ratings of PM Modi following the Budget indicates that the presentation was seen favourably by people.

Share your views using the hashtag and watch here-https://t.co/LGCyJUWcLF pic.twitter.com/ht6WvVUReA

Conversely, for Congress President Rahul Gandhi who has been trying to form alliances and was named PM candidate by his ally in Tamil Nadu DMK's MK Stalin, the graph shows a steep decline throughout the timeline of the survey.

The decline for Rahul Gandhi's favourability continues during that period from 23.5% to 19.1%.

The trend follows post the IAF operation which took place on February 26. PM Modi's fabourability smashes rooftops with a jump of close to 15% since the Day one of the survey. On the last day of the poll, which is on March 7 PM Modi gets 61.7%.

(This SOTN Poll is part of the largest and definitive independent sample survey tracker series carried out in India over the last 24 years, conducted by independent international polling agency CVoter. The CVoter Tracker is carried out each and every week, 52 waves in a calendar year, in 11 national languages, across all States in UTs in India. All our polls are based on a random probability sample as used in the globally standardized methodology, carried out by trained researchers across all geographic and demographic segments.)