With the Election Commission announcing Lok Sabha elections from April 11, the talks between the Congress and National Conference regarding a pre-poll alliance in the state of Jammu and Kashmir in on-going.

While addressing the media, the NC leader said:

"In Kashmir, there will only be NC candidates National Conference candidates in all three states. There will be no compromise. If that suits Congress then we can take it further else no. But there is no way we will compromise in those 3 seats".

When asked whether there is any communication after NC leaders demand, Omar said that he awaking their response.

"The Congress has not replied yet."

The National Conference chief even connected the delay of the Jammu and Kashmir assembly polls to China's move in the UNSC. He even called the delaying of the polls as a "giving a victory to Pakistan". He blamed PM Modi for China's action of using its right to veto in the UNSC over resolution against Masood Azhar, saying that PM Modi "surrendered to the country".

PM Modi surrendered to China on Azhar and surrendered to Pakistan & its proxies by delaying elections in J&K. How can the BJP claim to have been tough on internal security and tough against terror? https://t.co/OoVvP9ceDJ

He followed it up with: 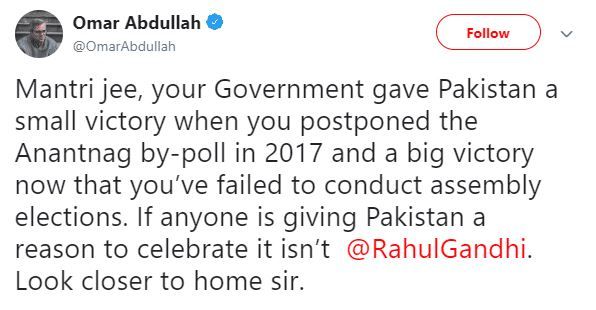 Read: Citing China's Block On Masood Azhar And Delayed Elections In J&K, Omar Abdullah Asks, 'How Can The BJP Claim To Have Been Tough?'