Posters of Shiv Sena leader and Yuva Sena president Aaditya Thackeray congratulating him as 'Future CM' for winning the Maharashtra assembly elections with a large mandate. This follows Shiv Sena chief Uddhav Thackeray's 'reminder' to the BJP about their agreement to share power on the basis of 50:50 formula after the counting of votes for Maharashtra assembly elections. Shiv Sena's mouthpiece 'Saamna' also published an editorial criticising BJP for getting fewer votes since the previous assembly polls despite having an alliance with it.

See the poster below:

The poster says, "Hearty congratulations to Yuva Shiv Sena and future chief minister Aaditya Thackeray for winning the assembly polls with a huge mandate." The poster was put in Worli, Mumbai from where Thackeray had contested. The 29-year-old politician won with a margin of 67,000 votes. 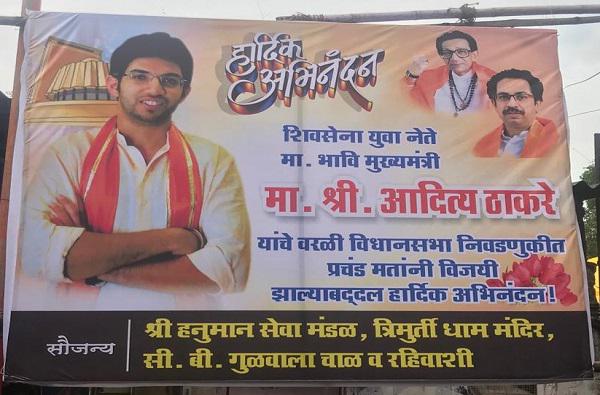 READ | Sena warns BJP: Don't get ahead of yourself or will be taught a lesson

Earlier on Wednesday, the Shiv Sena issued an indirect threat to BJP through its editorial in 'Saamna'. It warned the BJP to not get ahead of itself over the assembly poll result or else it would be taught a lesson by the people. It also laid importance on its alliance with the party by reminding that BJP could not win the majority without Shiv Sena.

"...The people of Maharashtra have spoken — don't get ahead of yourself; if you attempt to throw your weight through politics then you will be taught an unforgettable lesson," the Shiv Sena said in the editorial. The piece also reminded the BJP that, "you did not get the majority on your own."

After it was established that the BJP-Shiv Sena Mahayuti would cross the halfway mark, party chief Uddhav Thackeray 'reminded' BJP about the agreement to share power in the 50:50 formula. Thackeray curtly told that his party would not compromise in this agreement. He also added that the Shiv Sena would not ally with Congress and NCP coalition.