After PM Narendra Modi and party president Amit Shah, Union Minister Piyush Goyal has prefixed his name with 'Chowkidar', latching on to the 'Main bhi Chowkidar' campaign of BJP ahead of Lok Sabha elections.

After PM Narendra Modi and party president Amit Shah, Union Minister Piyush Goyal has prefixed his name with 'Chowkidar', latching on to the 'Main bhi Chowkidar' campaign of the BJP ahead of Lok Sabha elections 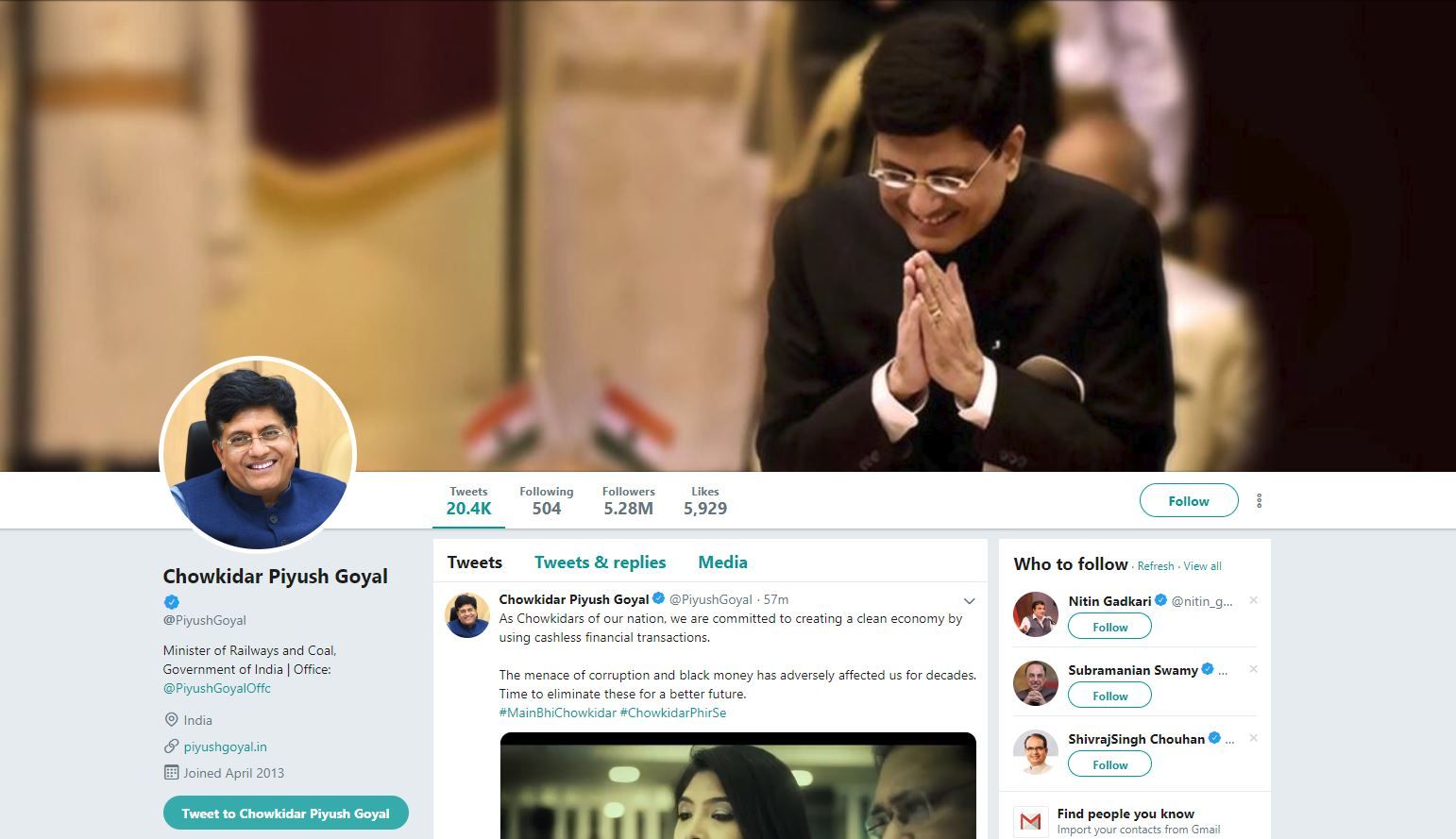 Prime Minister Narendra Modi on Saturday urged his supporters to take the ‘main bhi chowkidar’ (I too am watchman) pledge, saying he is not alone in the fight against graft and social evils.

Your Chowkidar is standing firm & serving the nation.

But, I am not alone.

Everyone who is fighting corruption, dirt, social evils is a Chowkidar.

Everyone working hard for the progress of India is a Chowkidar.

Today, every Indian is saying-#MainBhiChowkidar

Brought up to counter the opposition's never 'chowkidar chor hai' jibe, Prime Minister Narendra Modi launched the campaign on Twitter, wherein he requested his followers to interact with him using the hashtag.

The campaign was launched in the morning on Saturday. But by noon on the very same day, it became the biggest talking point on the social media website.

Aimed at bringing people together and suggesting anyone who fights and stands up against the wrong is a 'chowkidar', the party is hoping to recreate the 'Chai pe charcha' campaign magic which began prior to 2014 polls following chaiwala jibe by Congress leader Mani Shankar Aiyar on PM Modi.

The Prime Minister began this campaign through a Twitter post of his, wherein he complimented all those working for the betterment of the society by calling them as 'chowkidar'.

The BJP, after conducting surveys, reportedly found out that the jibes by the opposition, especially Congress president Rahul Gandhi, wasn't going down well with the people of this country, and hence, they are now aiming to use that very jibe to their benefit.

PM Modi will also interact with people from across the country on March 31 as a part of this campaign. Further, in order to engage more and more followers on Twitter, the party will send personalized message from the Prime Minister to those who take part in this campaign.