As Mamata wins a landslide victory in Bengal, Union Minister Babul Supriyo on Sunday, refused to wish Mamata Banerjee on retaining Bengal or accept the people's mandate. Supriyo lost to TMC's Aroop Biswas who won 1,00,491 votes while Supriyo won 51,064 votes. Currently, TMC has leads in 213 seats while BJP has leads in 77 seats. 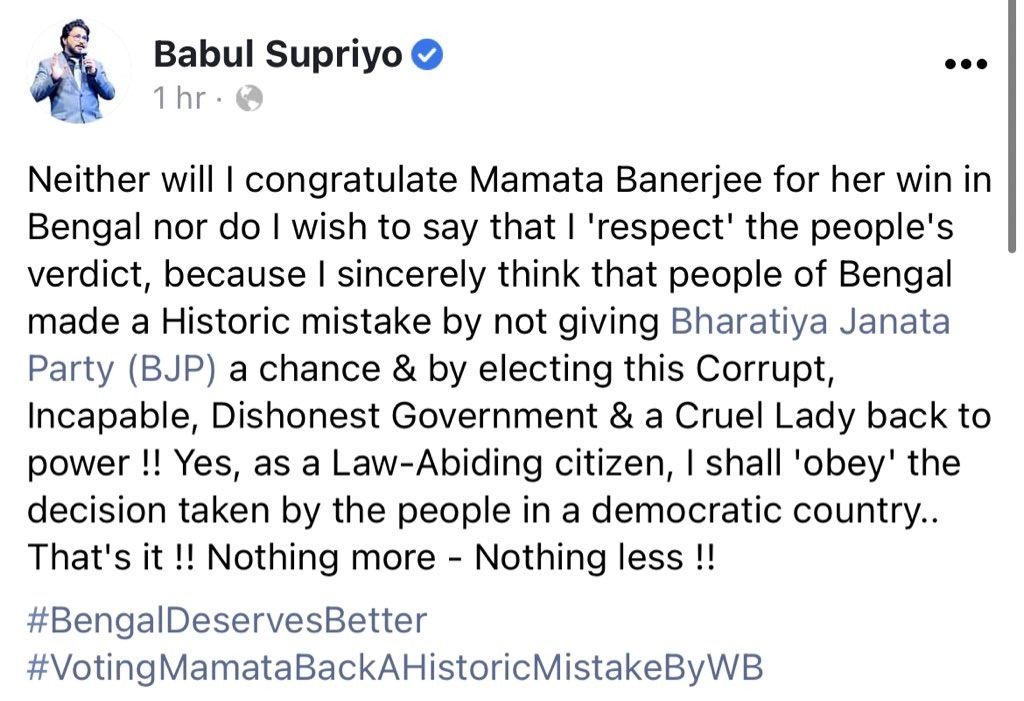 The biggest face-off in phase five was between Union Minister Babul Supriyo and sitting TMC minister Aroop Biswas for Tollygunge - the heart of the Bengali film industry. Falling under the Jadavpur Lok Sabha seat, the Asansol MP had staged a protest after being gheraoed by a section of students in the Jadavpur University for nearly six hours. While Supriyo has defeated TMC’s Dola Sen in both 2014 and 2019 from the Asansol Lok Sabha constituency, Tollygunge has voted for Aroop Biswas in 2011 and 2016, trouncing CPM's candidates.

TMC has stormed back to power in Bengal trouncing an emerging BJP on Sunday. As per EC's latest trends, TMC is leading in 213 seats, while BJP is leading in 77 seats. On the other hand, the Congress-Left-ISF combination has failed to win a single seat. While Independent candidates have won 1 seats, RSMP has won 1 seat. The 294-seat Assembly battle has been close as the BJP aimed to break the final Bengal frontier.

The biggest upset for TMC is that CM Mamata Banerjee has lost to ex-aide Suvendu Adhikari at Nandigram on Sunday, by a margin of 1737 votes. While the Election Commission is yet to declare the victory to Adhikari, Banerjee herself has accepted her defeat, but said that she will challenge the verdict in court. The nail-biting clincher saw Suvendu Adhikari take the lead by 4000 seats over Mamata Banerjee, but later the margin reduced to mere 6 votes, before Mamata took the lead.

Alleging cheating in Nandigram, Mamata said, "EC announced the win now they are saying something else. We fight this in court.  We will go to the constitutional bench and fight this. I'll accept the decision of the people of Nandigram. All it matters that we gained landslide victory".