While addressing a press conference at the BJP headquarters on Tuesday, Union Finance Minister Arun Jaitley launched scathing attacks on the manifesto released by the Congress for 2019 Lok Sabha polls

While addressing a press conference at the BJP headquarters on Tuesday, Union Finance Minister Arun Jaitley launched scathing attacks on the manifesto released by the Congress for 2019 Lok Sabha polls

Among other aspects of the manifesto, Jaitely specifically took on the promise regarding the 'Goods and Services Tax 2.0' in the 'Hum Nibhayenge' (We will deliver) document that was released by Congress party president Rahul Gandhi. The headline feature of 'GST 2.0' is that it will be based on a 'single, moderate, standard rate of tax on all goods and services.'

Countering this point, Jaitley presented his argument wherein he said,

"Attacking GST is their one naive mistake, to which I have answered 10 times so far. And nobody is willing to understand. The concern here is only that there is one single rate."

Mocking the Opposition, he referenced the oft-cited example of Singapore which has just the one GST rate:

"I think that they went to Singapore once, and nobody is under the poverty line out there. Which is why the entire population is equal when it comes to taxation. There is GST on food, milk, products  conusmed by the middle-class as well as the ones purchased by the upper-most class. All come under the uniform and standard rate of 7%. So, I asked their Prime Minister, that 'will rice and and a Mercedes car, both come under the 7% taxation?' He replied, 'Yes ofcouse.'

READ: WATCH: "Being An Anti-national Will No Longer Be A Crime," Says Arun Jaitley In His Stinging Counter To Congress' Manifesto Promise Of Scrapping Sedition Law

He contrasted this with India:

"But a country likes ours, where a large chunk of the population comes under the Below Poverty Line (BPL) category, you cannot impose the same kind of taxation like the one that exists in Singapore. Then how can there be a single rate?

"On one side there are clothes, a slipper of a poor person, and on the other side, there is an air-conditioner. Can same rate of tax be applied on these? These promises that are made out of stupidity have no limits. And like I have said before that this party has essentially played with the poor people through their numerous protests - their lies that have been there for so many years - and this manifesto is yet another tool to propagate the same lies and bluff."

When it comes to GST, in their newly launched manifesto, Congress has stated a range of promises, such as to review and replace the present GST laws with the 'GST 2.0' regime that will 'truly reflect the intent and purpose of a  non-cascading, value-added, indirect tax.' They also state that the regime will levy a special rate of duty on 'demerit goods', and that 'essential goods' of mass consumption (such as food grains, life-saving drugs, vaccines, etc.) and 'essential services' will be exempted from GST 2.0. Simplifying the GST structure is the motive behind all of the 14 points mentioned regarding GST 2.0 in their manifesto. 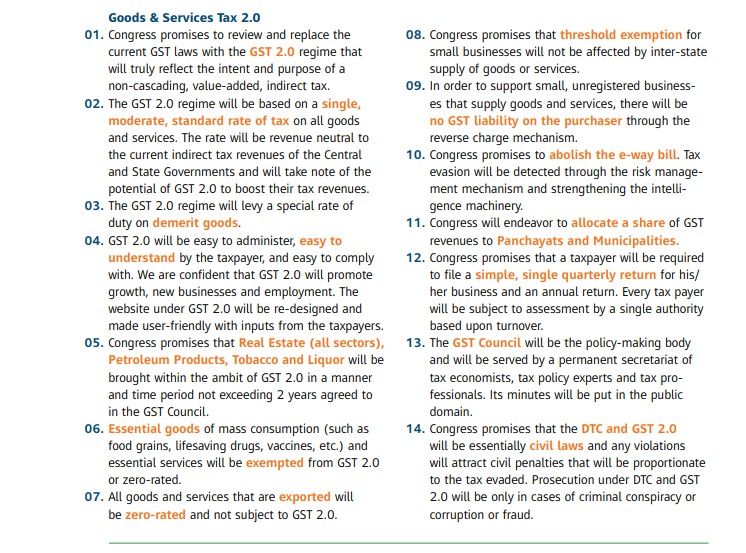