In the second sting, Congress MP Santokh Singh Chaudhary from Jalandhar admitted to the party taking black money from those funding them and willing to exchange it for favours

As the largest democracy in the world goes to vote in less than a month, REPUBLIC BHARAT in an explosive sting called the OPERATION BIKAU SANSAD has exposed those who represent Indians in the Parliament and still are willing to sell the country's aspirations for a sum of money.

While there have been murmurs of the dirty ongoings within for decades, no Indian news channel has dared to break out of the ‘ chalta hain ’ attitude and conduct a deep investigation to pull out the clincher of how Indian Parliamentarians are on sale.

The channel conducted three stings on three different Members of Parliaments, people who are supposed to put forth 900 million Indians aspirations to the fore and engage for in it in the first pillar of democracy - the Parliament.

In the Republic Bharat 3-part sting series, there’s open chatter about cash, contracts, ‘hundi’, hawala, trading offers and price tags that ran into crores in exchange for favours-- shockingly, all from sitting MPs and across political parties.

In the second sting, Congress MP Santokh Singh Chaudhary from Jalandhar admitted to the party taking black money and willing to exchange it for favours when it came to power.

He also admitted that Demonetisation had a huge impact and hurt the party's cash flow. 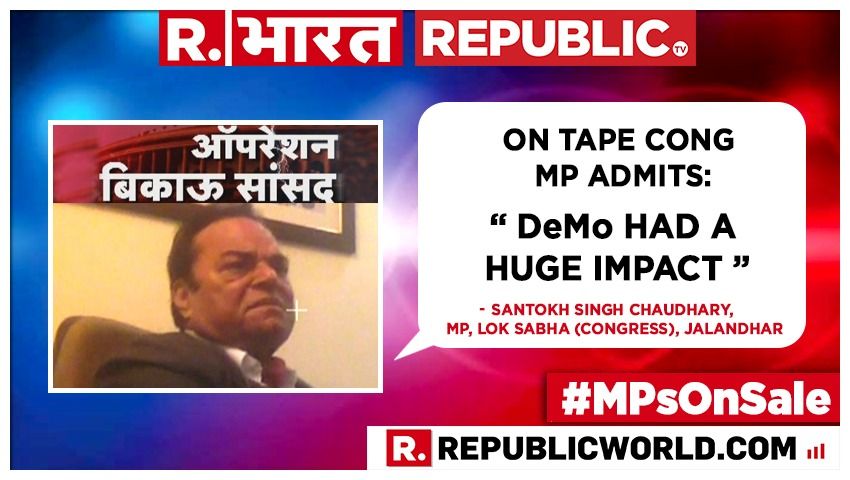 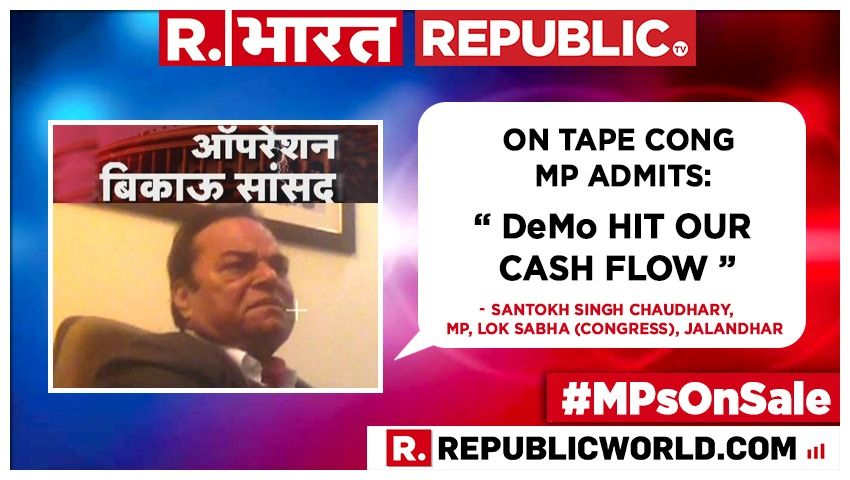 However, when confronted by the channel about the sting, he denied ever claiming those things and said "I have never said this"

"This is a wrong statement. We are in the position for five years, anyone can come to us," he said.

After being told the impact of the sting conducted on him and pressed further the MP runs away.

Watch the video above.

As Sharma continued to deny being a middleman for Corporates, asking and accepting money in exchange for asking a question in the Parliament, Republic Media Network's Senior News Editor Prakash Singh made him watch his own sting live in his hotel room.

MP Ram Kumar Sharma who was verbose with his denials of the sting was stumped to silence and walked away.

MUST WATCH: Bihar MP Stung By Republic Bharat Watches His Own Sting Tape, Is Confronted With What He'd Said To A Hidden Camera