As many as 12 opposition leaders on Sunday issued a joint statement, extending their support to the protesting farmers' countrywide protest call on May 26.


After Chief Minister of Punjab Captain Amarinder Singh urged the Farmer Union to put an end to the ongoing protest in view of the COVID-19 pandemic, the leaders of the opposition came forward to extend their support to the farmers by releasing a joint statement on Sunday. Referring to the farmer protest as 'heroic peaceful Kisan struggle', the 12 opposition party leaders in the joint statement, extended their support to the call given by the Samyukta Kisan Morcha (SKM) to observe a countrywide protest on the completion of 6 months of the protest on May 26. 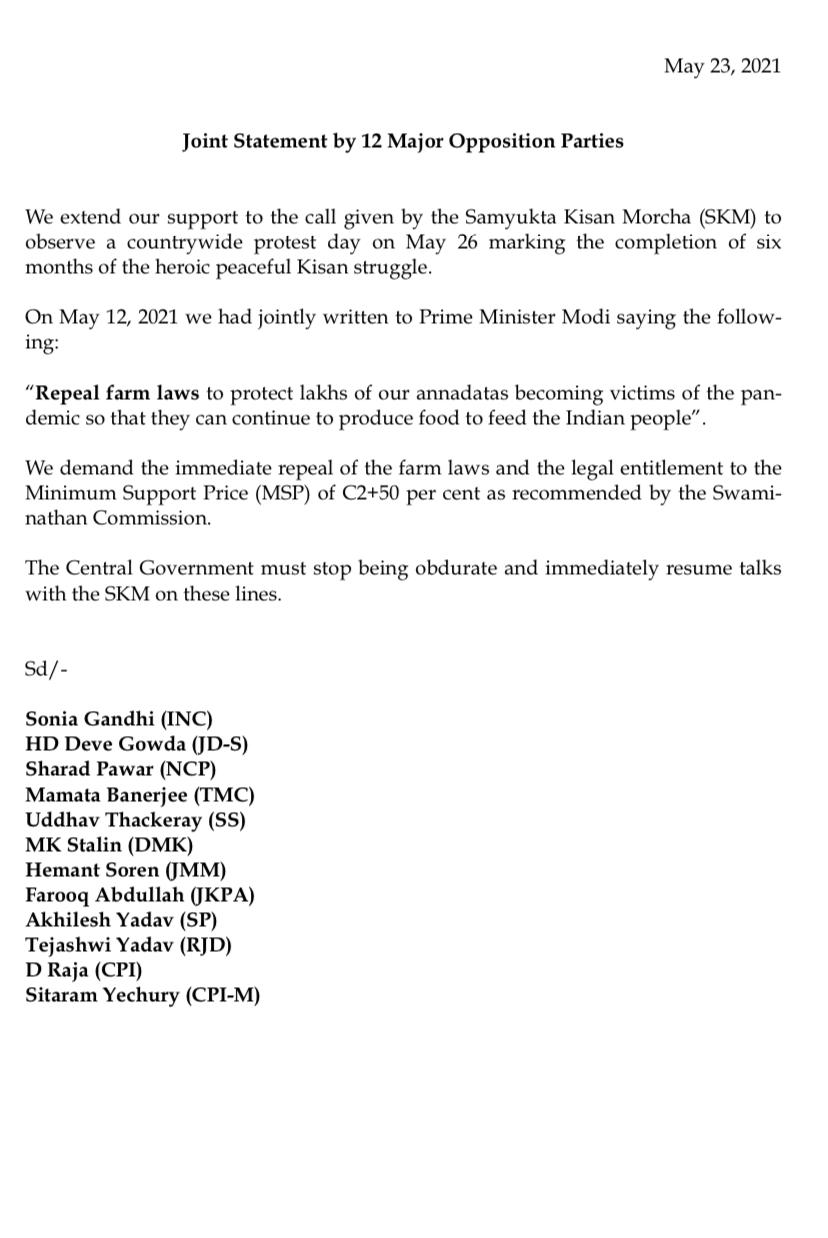 The leaders also added excerpts of the letter written by them to Prime Minister Narendra Modi. "Repeal farm laws to protect lakhs of our annadatas becoming victims of the pandemic so that they can continue to produce food to feed the people of India," it read and vividly reiterated that the opposition demands the immediate repeal of the farm laws and the legal entitlement to the Medium Support Price of C2+50 percent as recommended by the Swaminathan Commission. The letter said, "The Central Government must stop being obdurate and immediately resume talks with the SKM on these lines."

This comes after Captain Amarinder Singh urged the Bharti Kisan Union (Ekta Ugrahan) to not go ahead with their proposed dharna, which according to him could turn into a super-spreader of the virus. "An event like the proposed 3-day dharna of the BKU (Ekta Ugrahan) in Patiala, had the potential to nullify the efforts made by his government in tackling COVID in the state, he said while urging the farmers’ union not to act irresponsibly and endanger the lives of their own people with such reckless behaviour amid the pandemic, especially when there is a complete ban in the state on all gatherings as per the state's lockdown guidelines.

Captain Amarinder said that all these months the state government had extended support to the agitating farmers on the issue of the Centre’s farm and the group’s action was completely unjustified. “It is time for the farmers now to reciprocate by supporting the state government in the fight against the pandemic. Just as the farmers’ interests were inexorably linked with that of Punjab, so was Punjab’s interest dependent on the farmers’ support to his government in the battle against COVID," he said.

The statement have been coming in response to the announcement made by the farmers to observe May 26 as a 'black day' marking six months of the farmers' protests at Delhi borders against the Centre's farm laws."On May 26, we will complete six months of this protest and it also happens to mark seven years since PM Modi formed the government. We will observe it as black day," Samyukta Kisan Morcha's Balbir Singh Rajewal had said.

After completing a peaceful 'Chakka Jam' across India except in Delhi, Uttar Pradesh, and Uttarakhand, Tikait and other BKU leaders toured poll-bound Assam, Bengal, Tamil Nadu, Kerala, and Puducherry seeking farmers' support against the Centre's Farm Laws, urging them to not vote for BJP. Moreover, after the violence witnessed on Republic Day, Delhi police fortified the city borders by cementing nails near barricades, deploying additional troops, adding barbed wires, etc at Ghazipur (Delhi-Uttar Pradesh) and Tikri (Delhi-Haryana) borders, blocking access to the roads completely. MHA had snapped off the internet across all three border areas - Tikri, Singhu, and Ghazipur and later extended the ban to 1-2 days more. Farmers have reiterated 'No Ghar Wapsi till Law Wapsi', as the 3-month protests have caught several international celebrities' interest online. The SC-appointed panel has submitted its report to the apex court after holding several rounds of talks with many farmer unions, trade unions, manufacturers, food processing units, etc.

READ | Kisan leader seeks release of arrested farmers after clashes with cops in Haryana's Hisar
First Published: 23rd May, 2021 20:45 IST
SUBSCRIBE TO US