The UNESCO World Heritage Site, Ramappa Temple has been beautifully illuminated in the colours of the national flag to mark India's 75th Independence Day. 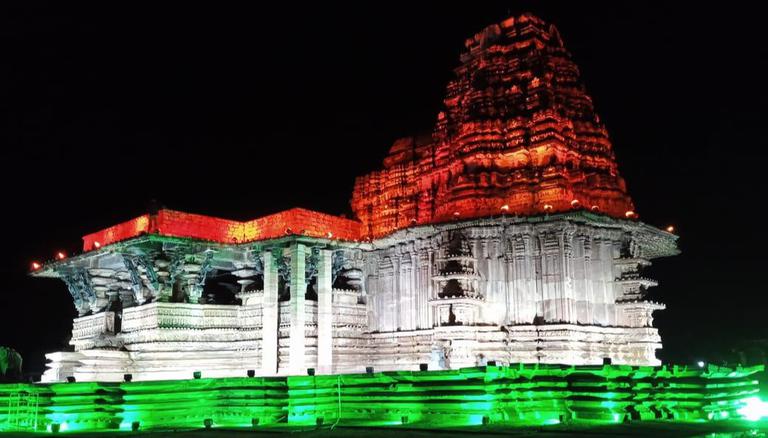 
At a time when illuminating heritage monuments have now become the talk of the town, the UNESCO World Heritage Site, Ramappa Temple, also known as the Rudreshwara temple in the state of Telangana has been beautifully illuminated in the colours of the national flag. This marks the Centre's Azadi ka Amrit Mahotsav which has been taken up by the government to commemorate the celebrations for India's 75th Independence Day.

The videos and pictures of the World Heritage Site have gone viral on social media showing the temple lighten up in tricolour during the night time which gives a splendid view.

The temple which is located 15 km from Mulugu, 66 km from Warangal, and 209 km from Hyderabad is a Kakatiya-style Hindu temple dedicated to Lord Shiva in Telangana.

It is pertinent to note that several state governments have taken up the bid to illuminate historical monuments to celebrate the country's 75th Independence Day. Earlier, the Delhi government had also said that five major monuments across the city would light up in the colours of the national flag to mark the historical day.

Centre ramps up preparations ahead of Independence Day

The central government has been making extensive preparations to celebrate India's 75th Independence Day. It is also leading the 'Har Ghar Tiranga' movement to promote and encourage people to display/hoist the national flag at their homes on the day.

READ | Jammu: Muslim women stitch Tiranga in Rajouri ahead of I-Day; 'We are proud of our work'

An initiative taken by the Ministry of Culture, the 'Har Ghar Tiranga' campaign has been launched by the government to invoke a feeling of patriotism among the people, the Ministry has been also making preparations to involve more and more people in the movement.

During this while, the Centre has targeted to encourage the hoisting of the Tricolour atop more than 20 crore houses between August 13 and August 15.

This will be done through public participation and the involvement of government and private establishments, according to an official statement. Over 100 crore people will participate in the campaign to rededicate themselves to the service of Mother India. It will greatly contribute to inculcating a new sense of patriotism among people, it said.