Supreme Court set up a 9-judge Constitution Bench which would hear the right to pray matter from January 13, which is likely to be heard on a day-to-day basis.

The Supreme Court on Monday set up a 9-judge Constitution Bench which would hear the right to pray matter from January 13 onwards. As per the sources, it will be a day-to-day hearing. This development comes nearly two months after a 5-member Constitution Bench comprising former Chief Justice Ranjan Gogoi, Justice Nariman, Justice Khanwilkar, Justice Chandrachud, and Justice Malhotra decided to expand the scope of the Sabarimala review pleas and referred it to a larger bench for adjudication. 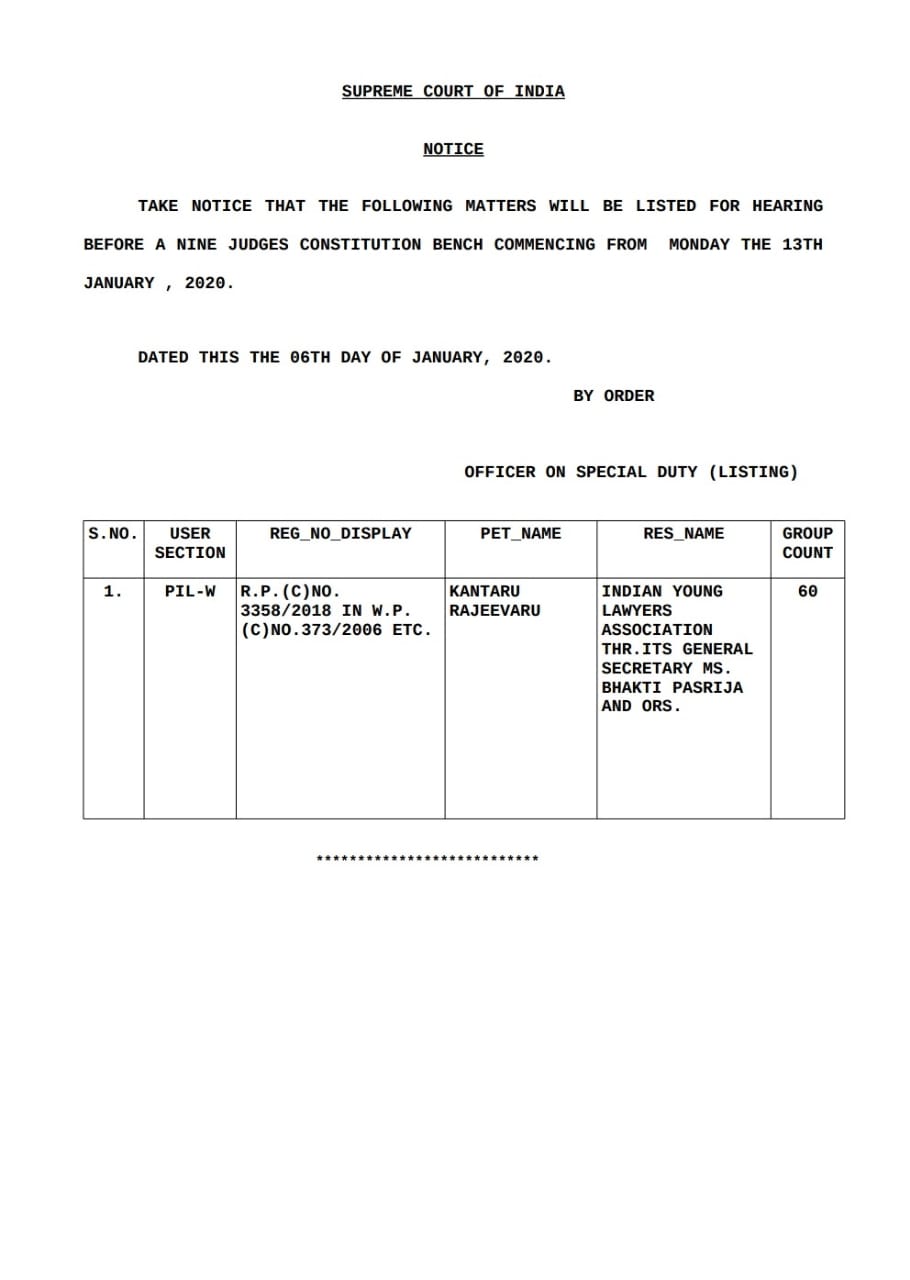 The November 14, 2019 majority judgment clubbed a whole range of issues including the entry of women in mosques and the tower of silence, the legality of female genital mutilation in the Dawoodi Bohra community along with the Sabarimala matter. Noting that the endeavour of the petitioner was to revive the debate on what constitutes an integral part of religion, the CJI questioned whether a constitutional court could interfere in the matters of faith. He mentioned that in a legal framework, the courts should tread carefully with issues regarding religious practices.

CJI Ranjan Gogoi observed that both sections of the same religious groups had the right to propagate religious practices. Thereafter, he added that the issues arising in the present case and regarding Muslim women and Parsi women may be overlapping. Furthermore, he contended that it was high time that the SC evolved a judicial policy to do justice to constitutional principles.

What is the Sabarimala case?

On September 28, 2018, the SC lifted the ban on the entry of women belonging to all age groups in the Sabarimala temple. This sparked off huge protests across Kerala. The Travancore Devaswom Board (TDB) which manages the shrine, argued that the SC could not interfere with a century-old belief. The ban on entry of women has been justified on the grounds that Lord Ayyappa, the presiding deity is celibate. On the other hand, the government of Kerala supported the verdict maintaining that religious practices that clashed with fundamental rights could be set aside. After hearing the review petition filed by the TDB, Pandalam Royal Family and a group of devotees, the Constitution bench had reserved its verdict on February 5, 2019.