Supreme Court notified that a special bench has been constituted to hear the matter on October 7 at 10 AM on the basis of the letter written by students.

Supreme Court to hear the Aarey case on Monday after the Bombay High Court refused to stay the mass felling of trees. The Supreme Court notified that a special bench has been constituted to hear the matter on October 7 at 10 AM on the basis of the letter that was written by the students. 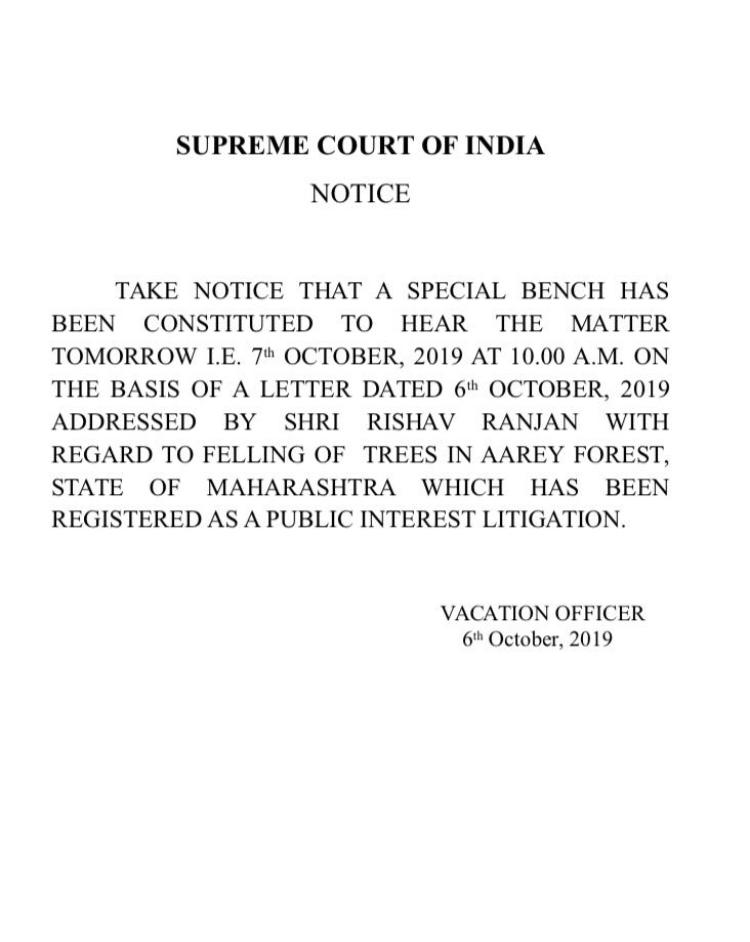 The Apex Court is currently on a Dussehra vacation till October 13. Accentuating on the urgency of the situation, the students appealed to the Supreme Court to intervene as the Mumbai Metro Rail Corporation (MMRCL) continues to fell trees in Aarey.

The letter points out the gravity of the issue stating, "By the time an appeal is filed in the Hon'ble Supreme Court we feel that part of Aarey will be cleared with all trees axed leading to irrevocable loss." The students had also stated how their fellow protestors had been arrested by the police for conducting a peaceful protest in the Aarey area on Saturday. They also notified the CJI that MMRCL had already felled 1500 trees in Aarey, in spite of massive protests. They have stated their constitutional right to approach the SC in this matter. They hope that the SC would grant them relief by saving the 'lungs of Mumbai'

A sessions court in Mumbai on Sunday granted bail to 29 protesters arrested over the last two days on charges of allegedly obstructing and assaulting police personnel on duty during protests against the felling of trees at Aarey Colony.

Additional sessions court judge H C Shende of the holiday court ordered their release on certain conditions including the production of the personal surety of Rs 7,000 and assurance that they would not take part in protests.

However, the protesters are unlikely to walk out of the Thane jail, where most of them are currently lodged, on Sunday pending completion of the legal procedure and other formalities. The arrests were made over Friday night and Saturday after clashes broke out between the police and green activists opposing axing of trees by Mumbai Metro Rail Corporation Ltd (MMRCL) in Aarey Colony in north Mumbai.