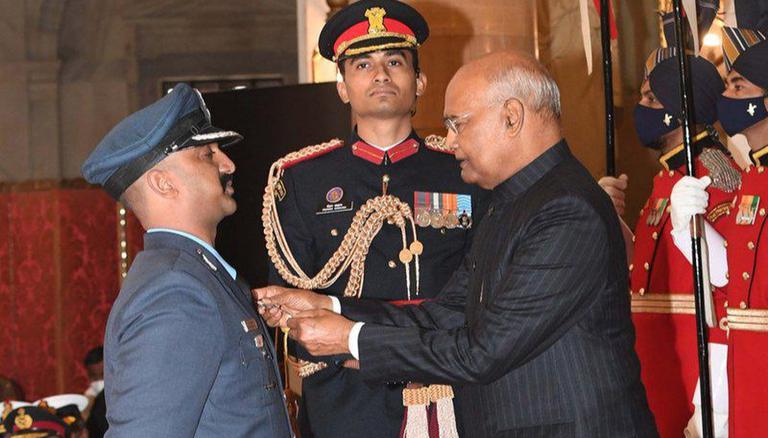 
Indian Air Force Wing Commander (now Group Captain) Abhinandan Varthaman was honoured with the Vir Chakra by President Ram Nath Kovind on Monday, November 22. He was honoured for his contribution to the Balakot Airstrike in 2019.  Abhinandan Varthaman was a Wing Commander and had an on-air tussle with the Pakistani fighter jet in the aerial combat between Indian and Pakistani Air Forces in retaliation to the 2019 Pulwama attack.

Several leaders across the country hailed the awardee. The official account of the President of the country tweeted, “President Kovind presents Vir Chakra to Wing Commander (now Group Captain) Varthaman Abhinandan. He showed conspicuous courage, demonstrated gallantry in the face of the enemy while disregarding personal safety and displayed an exceptional sense of duty.” Former Indian batsman and currently a BJP MLA, Gautam Gambhir also appreciated Abhinandan and tweeted, “He is my BROTHER! Jai Hind #Congratulations.”

He is my BROTHER! Jai Hind 🇮🇳 #Congratulations pic.twitter.com/76U1JGHX4H

Many congratulations and best wishes to the brave Group Captain of the Indian Air Force, Shri Abhinandan Varthaman ji, for being honored with the Vir Chakra. pic.twitter.com/bMqnvvxJNo

Congratulations to Shri Abhinandan Varthaman, Group Captain of @IAF_MCC on being conferred with the prestigious Vir Chakra. His valiant effort in shooting down a Pakistani F-16 fighter aircraft at Balakot in PoK during an aerial combat on Feb 27, 2019 made every Indian proud. pic.twitter.com/9M3XapUX8X

Varthaman was praised for taking down the enemy right before his MiG-21 aircraft was shot down by the Pakistani forces. The officer landed in the region of Pakistan-occupied Kashmir (PoK) and was immediately taken into custody by the Pakistan Army. He was released by the Pakistani Government on March 1, 2019, after diplomatic pressure by India. Wing Commander Abhinandan was given a promotion and was appointed as the Group Captain on November 3, 2021.

READ | Vaishali Takkar gets engaged to Dr Abhinandan, read more about the 'man of her life'

Balakot Air Strike was an aerial attack conducted by India in Pakistan on February 26, 2019, in response to the February 14, 2019, Pulwama terror attack by the terror outfit JeM, which took the lives of 40 Central Reserve Police Force (CRPF) Jawans. On February 26, a squadron of the IAF crossed the borders over to Pakistan and destroyed the largest JeM terrorist training camp in Balakot in Khyber Pakhtunkhwa province to avenge the Pulwama terror attack. The operation was Codenamed 'Operation Bandar' and was carried by the Indian Air Force's seventh and ninth squadrons, killing approximately 300 JeM terrorists using precision SPICE bombs. Months later, Imran Khan conceded that India had in fact, carried out the Balakot airstrike on Pakistani soil and feared that it was 'hatching a bigger plan' against the country.