In a major breakthrough in Ayodhya land dispute case ahead of the crucial order by five-judge Supreme Court bench on court-monitored mediation in the case, Republic TV on Friday accessed names of panels of mediators proposed by the stakeholders.

In a major breakthrough in Ayodhya land dispute case ahead of the crucial order by five-judge Supreme Court bench on court-monitored mediation in the case, Republic TV on Friday accessed names of panels of mediators proposed by the stakeholders - Nirmoho Akhara and Hindu Mahasabha.

Hindu Mahasabha, a stakeholder in the Ram Janambhoomi-Babri Masjid land dispute case consented and proposed three names for mediation on the Supreme Court's March 6 order on whether the case should be referred for mediation. 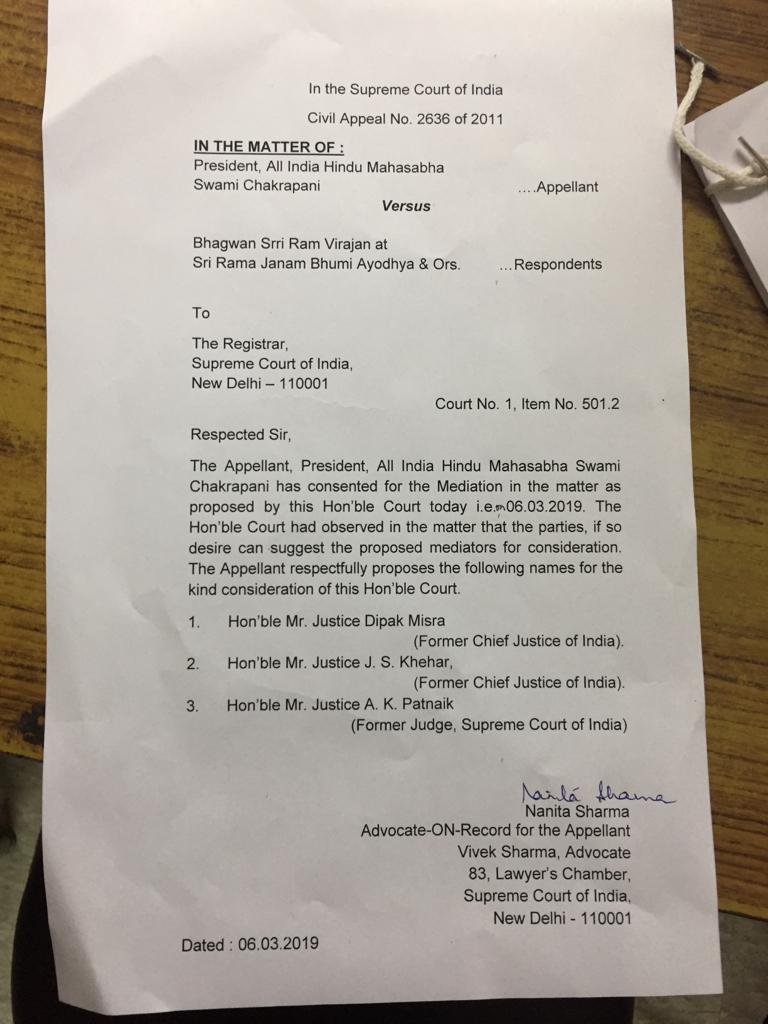 READ: Ayodhya Case: Big Day Looms On Friday With Supreme Court Set To Pronounce Order On Court-monitored Mediation. Here's What It Could Entail

Furthermore, the Nirmohi Akhara, the only Hindu body that had earlier not opposed the SC suggestion on mediation, is likely to recommend the names of retired Supreme Court Justice Kurien Joseph on the panel of mediators for Ayodhya case. Names of Justice AK Patnaik and GS Singhvi have also been proposed as mediators in Ayodhya case. Sunni WAQF Board has also proposed names to be the mediators.

Meanwhile, the five-judge Supreme Court bench headed by CJI Ranjan Gogoi is scheduled to pronounce order on Friday on whether to refer Ayodhya's Ram Janmabhoomi-Babri Masjid land dispute case for a court-monitored mediation. On Wednesday, it has reserved the order after hearing petitions of various contesting parties - including Nirmohi Akhara, Akhil Bharatiya Hindu Mahasabha and the Muslims bodies.

"There need not be one mediator but a panel of mediators. When the mediation is on, it should not be reported on. It may not be a gag, but no motive should be attributed to anyone when the mediation process is on," Justice Bobde had said while pronouncing the order on March 6.

The SC bench had asked the contesting parties to explore the possibility of amicably settling the decades-old dispute through mediation - even as the relevant documents relating to the case take their required 8 weeks to translate and bring to order.